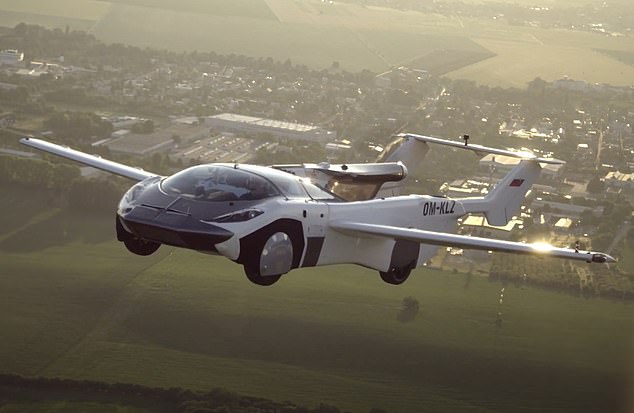 Not content with vehicles that stick to the road and drive on Tarmac, a plucky breed of pioneers has sought to give cars wings that will lift them elegantly into the air and above the traffic jams.

Barely a year goes by without a bold new flying car venture being announced, with production versions inevitably ‘just five years away’. But are flying cars a feasible and imminent reality? Or simply a flight of fancy?

Lift off: The Klein Vision AirCar takes to the skies for a 60-mile intercity flight of 35 minutes between Nitra and Bratislava airports in Slovakia

Fantasy flying cars have proved an intoxicating inspiration for those pursuing the real thing.

Chitty Chitty Bang Bang, created by James Bond author Ian Fleming, has been particularly loved. Even 007 himself has been foiled by a flying car, as the means of assassin Scaramanga’s getaway in the 1974 film The Man With The Golden Gun.

And in the sci-fi movie The Fifth Element, Bruce Willis drives a flying taxi though many lanes of flying cars. Not forgetting the cartoon Jetsons and TV puppet-­master Gerry Anderson’s Supercar of the 1960s.

Fantasy: Flying cars have proved an intoxicating inspiration for those pursuing the real thing

If you think flying cars are a modern invention, think again. Even motor industry pioneer Henry Ford was smitten, writing in 1940: ‘Mark my word. A combination airplane and motorcar is coming. You may smile. But it will come.’

The first generally acknowledged flying car is the Curtiss Autoplane, invented by aviation and motorcycle pioneer Glenn Curtiss in 1917. It was a triplane that used the wings from a Curtiss Model L trainer with an aluminium body that resembled a Model T Ford.

The great escape: James Bond was foiled by a flying car, as villain Scaramanga took to the skies in the 1974 film The Man With The Golden Gun

It had three seats in an enclosed cabin with the pilot or chauffeur sitting in front. Shown at the PanAmerican AeronauticalExposition at New York City in February 1917, it managed to make only a few short hops before the U.S.’s entry into World War I that April ended its development.

Waldo Waterman’s Arrowbile, with a 38ft wingspan, took to the air on March 21, 1937, powered on the ground and in the air by a Studebaker engine, enabling it to fly at 112 mph and drive at 56mph.

By 1949, inventor Moulton ‘Molt’ Taylor had designed and built the Taylor Aerocar in Longview, Washington. On the road, it towed folded wings behind. Although only six were ever made, it is still considered one of the first practical flying cars.

The last remaining yellow and green model is housed at the Kissimmee Air Museum in Kissimmee, Florida. One even flew Raul Castro — Fidel’s brother and the former Cuban president — around Cuba. It was also used from 1961 to 1963 to monitor traffic for a radio station in Portland, Oregon.

Other flying cars followed, though most failed to take off commercially. For decades Moller International has been flagging its oft-reported plans for its Skycar flying car. Yet, to date, none has flown in free, non-tethered flight as required by the authorities.

But more recently, there has been a spate of announcements. The Terrafugia Transition flying car was given the green light for take-off by America’s Federal Aviation Authority this year.

Futuristic: The cartoon Jetsons even took their dog for a ‘walk’ using their flying car

In July this year, the Klein Vision AirCar took to the skies for a 60-mile inter-city flight lasting 35 minutes between the airports of Nitra and Bratislava in Slovakia.

The brainchild of Professor Stefan Klein, his two-seater flying car with a fixed propeller and retractable folding wings converts in just two minutes and 15 seconds from a sports car into an aeroplane with a range of 620miles, a top speed of 120mph and a cruising altitude of 8,200ft.

Planned for arrival in 2023, the Slovakia-based AeroMobil flying car has a strong pedigree of European motor industry talent behind it, including former McLaren supercar CEO Antony Sheriff.

Up in the air: Hyundai Motor Group’s vision of the future with flying taxis ferrying passengers across cities

The giant Hyundai Motor Group has been accelerating into creating flying taxis as part of its wider mobility ambitions. The Korean carmaker set up an Urban Air Mobility Division — renamed Supernal — which, in January 2020, unveiled in partnership with Uber a prototype electric-powered vertical take-off and landing (eVTOL) flying car.

Since then Hyundai has announced plans for a refined version of a flying car using electric and fuel cell technology which it says will be in commercial service by 2028.

In the new year, Hyundai plans to demonstrate in Coventry the world’s first urban airport — dubbed Air One — set to be one of 65 such sites across the UK, mainland Europe, the U.S. and the Asia Pacific region to accommodate the flying cars.

The idea is for passengers to use a single app — like ‘rideshare’ platforms — to plan journeys which could include taking a car or a train from home to a flying taxi ‘­vertiport’, fly across town and take an e-scooter for the last mile

Chief executive officer of Supernal and president of Hyundai Motor Group Jaiwon Shin, who worked for NASA for 30 years, said: ‘In adding a new dimension to mobility, we are on a mission to transform how people and society move, connect and live.’

On a festive note, I have in the past commissioned top designers from some of the world’s leading car companies to come up with a 21st- century solution for one person who really could use a flying car — given the amount of parcels he has to deliver in one night.

I’ve always been amazed by the ingenuity they have deployed in creating a replacement for Santa’s sleigh — from a sleek futuristic Ford to the Vauxhall ‘Clausa’ and a Bentley ‘Flying B’ — as Rudolph, Donner, Blitzen and the other reindeer are allowed to ease into retirement.

So, as Santa takes to the sky, a Merry Christmas to all.