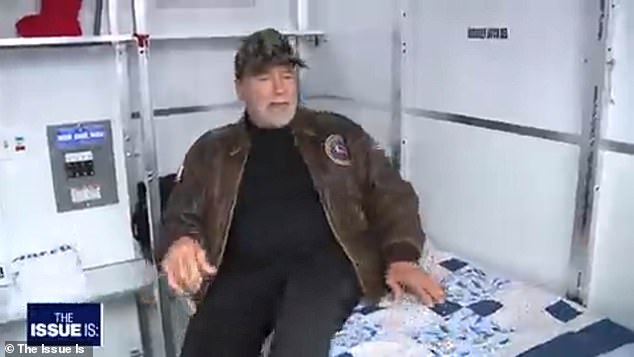 Schwarzenegger, who coordinated with nonprofit Village for Vets, which is dedicated to providing food and shelter to homeless and at-risk veterans, as well as Veterans Affairs Secretary Denis McDonough and volunteer organization (AMVETS) to build the tiny homes.

‘Today, I celebrated Christmas early. The 25 homes I donated for homeless veterans were installed here in LA,’ the movie icon and former Governor of California tweeted Thursday.

‘It was fantastic to spend some time with our heroes and welcome them into their new homes.’ Schwarzenegger was inspired to make the donation after seeing a news report about a tent encampment occupied mainly by homeless veterans which was later removed by the City of LA, and its occupants given their own tiny homes to live in.

On Thursday, Village for Vets tweeted that Schwarzenegger’s $250,000 donation to the nonprofit ‘made it possible’ for the organization ‘to purchase and build the remaining 25 shelters’ at the Los Angeles VA’s Care Treatment Rehabilitative Services (CTRS) site.

Four of the 25 tiny homes built with $250k in funds donated by Arnold Schwarzenegger, which were given to homeless veterans in Los Angeles before Christmas

Pictured: many of the homeless veterans personally thanked Schwarzenegger

‘Today, I celebrated Christmas early. The 25 homes I donated for homeless veterans were installed here in LA,’ the former Governor of California tweeted Thursday, pictured above

‘I’ve made and have this great success because of America,’ the former bodybuilder and actor born in Austria told Elex Michaelson, host of ‘The Issue Is’ on FOX 11 Los Angeles.

‘If it isn’t bodybuilding, if it isn’t business, if it isn’t show business, movies and politics — whatever I tackled I achieved because of America, so to me, it’s always great to give something back.’

‘It’s been a life-saver for me,’ Cooper, who lives in one of the tiny homes, told the outlet, adding that the former governor ‘has not forgotten…anybody.’

Donations to Village for Vets go toward the organization’s tiny shelters, which ‘provide an elevated standard of living from tent encampments while veterans are on their journey to find permanent housing and stability, and other programs providing essential services to homeless and at-risk veterans, according to the nonprofit’s website.

The interior of one tiny home, pictured, shows the home fully-equipped with a fuse box and electricity, and a number of other necessities

Pictured: many of the homeless living in West Los Angeles encampments are veterans, 25 of which are now living inside tiny homes provided by Arnold Schwarzenegger

A similar village of tiny homes for veterans exists in Kansas City, Missouri, where there is an innovative community of 49 tiny houses for homeless vets.

The homes range in size from 240 to 320 square feet, meet all local city code requirements, and connect to city utility services.

Similar to Missouri’s VCP Village, staff on-site provide sanctuary and emotional space needed for the veteran and support services team to thoroughly address the underlying causes of his or her homelessness.

‘Together, the veteran and VCP’s specially-trained case managers work to achieve incremental, lasting results in the areas of health and wellness, education, employment, financial literacy, and the development of a personal support network,’ the website reads.

Once their desired goals are met, VCP assists the Veteran in securing a permanent housing solution. The Veteran is allowed to take the entire contents of the tiny home as they transition to a new life.