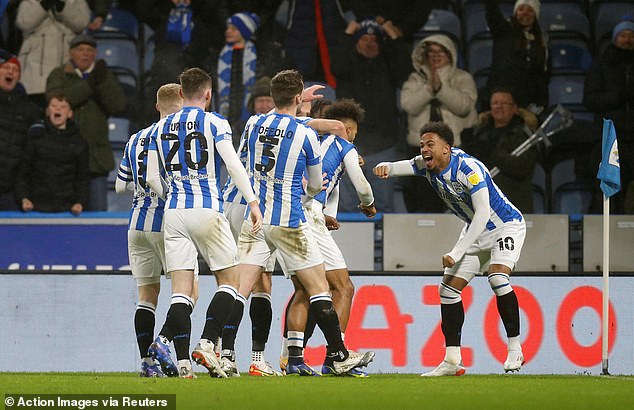 By Joe Bernstein for the Daily Mail


Huddersfield climbed into the Championship play-off places with a dramatic comeback victory though the game was marred by a serious concussion to Town defender Tom Lees.

An early goal flurry had put Blackpool 2-1 ahead inside the opening 18 minutes but the home side snatched the points late on after the visitors had been reduced to 10 men with a double from Sorba Thomas.

However, the action was overshadowed when Lees was caught on the side of the head by a flailing arm from his former Sheffield Wednesday team-mate Gary Madine.

Play was held up for eight minutes as the 31-year-old defender was treated by medics who also applied an oxygen mask.

The home side used a concussion substitute Ollie Turton but there will be questions why referee Jeremy Simpson initially waved play on and booked Huddersfield’s Harry Toffolo for complaining.

Mercifully, it was understood later after the game restarted that Lees was ‘coming round’ following his worrying collapse after 34 minutes.

Blackpool had opened the scoring after just 45 seconds when Josh Bowler intercepted inside the Huddersfield half and released Jerry Yates to fire home his seventh goal of the season.

But the visitors then regained their advantage with Keshi Anderson’s centre directed in my Madine.

The lengthy hold-up for Lees dampened spirits for the remainder of the first half but Huddersfield sensed the comeback was on after Jordan Gabriel was dismissed for a lunging challenge on Lewis O’Brien by the touchline.

They eventually made the extra man count after 80 minutes when Thomas exchanged passes with substitute Jordan Rhodes before firing home from eight yards.

Thomas then sealed the points four minutes later with a sharp finish from just inside the box that lifted The Terriers into sixth.