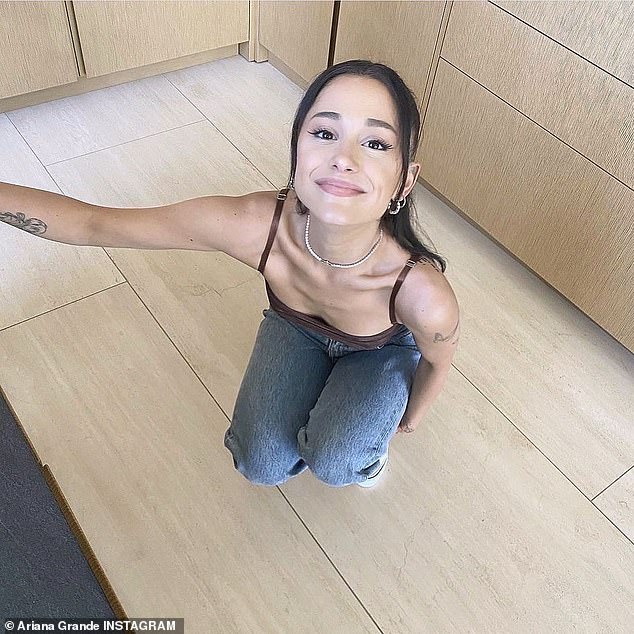 
Ariana Grande shared several unseen glimpses of her life as she posted an Instagram photo dump on Sunday.

The 28-year-old superstar shared a smiling snap, some sweet moments with husband Dalton Gomez and an image jamming out to the Wicked soundtrack in anticipation for her role in Wicked: The Movie.

In November it was announced that the No Tears Left To Cry singer had been tapped to star as Glinda the Good Witch opposite Cynthia Erivo’s Elphaba in a forthcoming big screen adaptation of the Broadway musical.

Beaming bright: The 28-year-old superstar shared a photo dump on Sunday which included a smiling snap at home as well as other unseen images with husband Dalton Gomez and more moments from her life

Grande beamed bright as she shared an at home snap crouched down wearing jeans and a brown bustier, with her brown locks back in a soft half ponytail.

Another image showed her the track One Short Day from Wicked blaring in her car, which she adorned with a string of heart face and tear drop emojis in anticipation for her role.

The song was originally performed by Kristin Chenoweth, who played Glinda, and Idina Menzel who played Elphaba back in 2003.

Grande had revealed her big casting news by way of an Instagram post on November 4 with the caption ‘thank goodness,’ having found out she had gotten the part on a Zoom call with director John Chu and Erivo.

Getting in the Wicked spirit! Ariana Grande shared a photo of the track One Short Day from Wicked blaring in her car as she geared up for her starring role in Wicked: The Movie after being tapped to play Glinda the Good Witch

Overjoyed: One image posted as part of her December 26 photo dump showed the No Tears Left To Cry singer covering her mouth with her hand as she modeled a big black hair bow

Wife life: A blurry selfie showed she and Dalton cuddled up together, as both seemed to be enjoying married life together after tying the knot back in May

In 2011 she seemed to manifest the role for herself as she tweeted about ‘how badly’ she wanted to play Glinda at some point in her life, and called it her ‘dream role.’

Other images as part of Ariana’s December 26 photo dump included a cuddly moment with her husband, snaps with her dogs and behind the scenes pictures from the film Don’t Look Up.

The former Nickelodeon star has continued to make her foray back into acting, having a small role as a singer Riley Binna in the Leonardo DiCaprio and Jennifer Lawrence led film.

She played alongside Kid Cudi in the newly released Netflix disaster comedy, and both singers penned an original track called Just Look Up which they performed in the movie.

Don’t Look Up: She played alongside Kid Cudi in the newly released Netflix film Don’t Look Up, and both singers penned an original track called Just Look Up! for the film

A wardrobe wow! A behind the scenes snap showed Ariana dressed in an elaborate costume while playing the role of Riley Binna in Adam McKay’s newly released disaster comedy

Getting glam up: Another image showed the stunning songstress getting glammed up

The Seven Rings singer also posted a sweet moment with her dogs as she fed one a bit of pizza.

Still enjoying some holiday down time, Grande additionally posted videos with her grandmother Marjorie, who famously had a part in helping to design her pearl and diamond engagement ring.

‘ariana went from telling us she loves us every day to deactivating… these r dark times,’ wrote one user, while another remarked: ‘ariana deactivated. there’s no point of twitter anymore.’

Dog mom: The Seven Rings singer also posted a sweet moment with her dogs as she fed one a bit of pizza

Riding passenger: One of her dogs was seen in a blurry car snap during a little night time joy ride