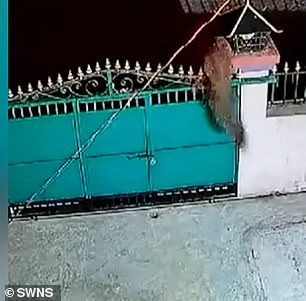 
This is the chilling moment a wild leopard scales a 10ft gate with a dog between its jaws.

Footage taken in Chhatarpur, in the state of Madhya Pradesh, central India, in early December shows the jungle cat roaming the neighbourhood.

Spotting the pooch behind a gate, the animal leaps over into a residential courtyard.

Footage taken in Chhatarpur, in the state of Madhya Pradesh, central India, in early December shows the jungle cat roaming the neighbourhood before it grabs the pooch

In the footage, it snatches the helpless dog up in its jaws and drags it back over to the other side.

The dog nervously backs away from the gate when it hears the leopard advance.

But the leopard clamps the dog between its jaws and goes back over the gate and off into the darkness.

This sighting of a leopard on CCTV comes after camera traps were installed at a farm in Chhatarpur in June.

Locals had complained about a suspected leopard sighting at the farm so camera traps were installed.

No animal footprints were found but forest officials said they were scanning the area.

The forest department also had assistance from Wildlife SOS which has been involved in animal rescues in the region in the past.

They had also installed a trap cage in the area in the past.

Those who complained said the leopard had strayed there but officials said it could not be seen because the footage was taken from a distance.

However, officials took the precautionary measures of installing camera traps and cages in a bid to see if the animals were in the area.