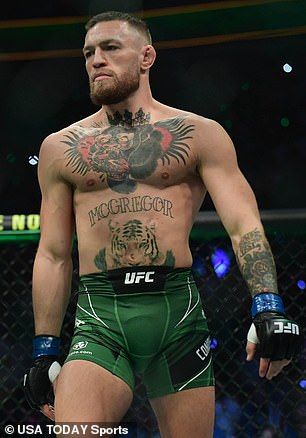 
Conor McGregor’s training partner has claimed the Irishman will fight Charles Oliveira on his return from injury and will regain his lightweight title.

McGregor, 33, is currently sidelined with a leg injury sustained during his UFC 264 defeat by Dustin Poirier in July, taking the Irishman’s record at lightweight to just one win in five years.

The Notorious’ latest defeat has seen him slip down to No 9 in the UFC’s lightweight rankings, with any chance of him reclaiming his 155-pound crown appearing some distance away.

However, McGregor called out lightweight champion Oliveira following the Brazilian’s win over Poirier at UFC 269, and ‘Do Bronx’ has accepted the former two-weight world champion’s challenge.

It remains to be seen whether the UFC top brass elect to schedule a fight between the champion and the No 9-ranked lightweight, but McGregor’s team-mate, Peter Queally, has predicted that the title fight may be next for the Irishman.

‘Normally in this sport, when you’ve got two fighters that want the same thing, that’s what happens.

Should McGregor face Oliveira next, the Brazilian would enter as the overwhelming favourite to defend his crown.

‘Do Bronx’ has won his last nine fights and dispatched of Poirier – who has overcome McGregor twice this year – with relative ease.

Yet Queally is confident that the 33-year-old can defy the odds and beat Oliveira should they meet next year.

‘For sure he can beat Charles,’ Queally added. ‘Obviously it’s not ideal to be out that long with an injury.

‘But you know Conor and what he can do, Charles has shown himself to be somebody that is a brilliant fighter but someone who gets hit. I always say that if you’re a fighter that gets hit against Conor, it’s bad news for you!

‘So I can see him winning that fight – of course it would be ideal if he hadn’t broke his leg and he was coming back from it, but these are things you have to deal with.

‘But that looks like the fight there’s going to be!’