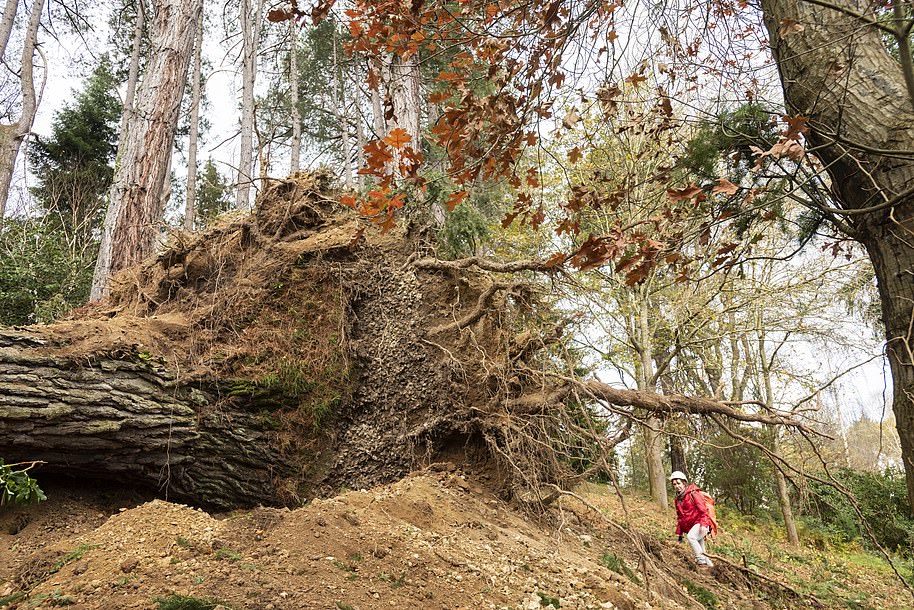 Wildlife was hit by storms, rainfall and wildfires in parts of the UK in 2021, in what is the ‘new normal’ due to climate change, the National Trust said.

The past year has been punctuated by extreme events and sometimes unseasonal conditions, from dry spring weather that prompted fires to Storm Arwen which brought down thousands of trees across the UK.

The National Trust’s annual review of wildlife and weather for the year highlights how climate change is affecting landscapes and nature – with winners and losers this year.

It was a good year for many orchids, but butterflies had a bad summer and it was a bad nesting season for birds at some of the sites the National Trust cares for across England, Wales and Northern Ireland.

The dry March and an April that was the fourth driest since 1862 saw wildfires at two significant landscapes cared for by the National Trust: the Mourne Mountains in Northern Ireland and Marsden Moor in Yorkshire.

The fire in the Mourne Mountains devastated 200 hectares (500 acres) of land, and the Yorkshire blaze ripped through 520 hectares (nearly 1,300 acres) of moorland, destroying a diverse range of plants and affecting threatened birds in both sites.

On the Dorset coast, a 300-metre cliff fall in April, the largest on the stretch of coastline for 60 years, was caused by prolonged periods of dry weather, rain and erosion by the sea, the National Trust said.

Wildlife winners of 2021 include beavers released on the Holnicote Estate in Exmoor, West Somerset (pictured) whose first kit was born in June

Record numbers of grey seals, pictured, are expected, thanks to plentiful fish and crabs for them to eat

And the late autumn, with a good show of colour, was brought to a sharp end in November with Storm Arwen, which uprooted hundreds of trees at Bodnant Gardens, Wales, and at other sites such as Wallington in Northumberland.

‘What we’re seeing in the UK with the impacts of wildfires and severe storms such as Arwen and Barra, is how climate change is altering our landscapes forever. ‘

He warned the extreme events were putting even more pressure on the UK’s wildlife, which is already in trouble with more than half of species in decline and 15% under threat of extinction.

‘Our nature is part of what makes the UK unique and we must all play our part to protect it, ‘ he urged, saying conserving nature and improving habitats could support larger populations that were better able to respond to climate change.

Orchids were among wildlife winners in 2021, with good displays of pyramidal orchids on Rodborough Common in Gloucestershire in June, bee orchids on the Golden Cap estate in Dorset, and autumn lady’s tresses at some grasslands and sand dunes in southern England and Wales.

But butterflies struggled, with 60% of species recorded in lower numbers than in 2020, according to conservation charity Butterfly Conservation’s Big Butterfly Count.

National Trust noticed butterflies emerging later in the very cool spring and lower numbers at sites such as in the New Forest, while the reintroduced large blue butterfly also saw numbers down in Somerset and Gloucestershire.

But purple emperors were seen at Anglesey Abbey, Cambridgeshire, for the first time, and at Sheringham Park, Norfolk, which they appeared to colonise in 2017, while the critically endangered spider Zora silvestris was discovered at Clumber Park in Nottinghamshire.

A chilly April and rain and gales in May hit the nesting attempts of birds from barn owls at Mount Stewart, Northern Ireland, to lapwings at Blakeney Freshes in Norfolk.

And it was a mixed year for terns, with different species of the seabirds faring well or badly at various sites depending on their local circumstances.

Arctic terns saw numbers increase at Long Nanny in Northumberland with the reestablishment of 24-hour patrols to ward off predators but little terns were flooded out, and Sandwich and common terns did well at Blakeney Point due to a lack of disturbance and plentiful food.

Late frosts in April and into late May hit apple blossom and the harvest particularly in northern parts of England and Northern Ireland, but a warm, damp autumn with few frosts proved to be a bumper year for grassland fungi such as waxcaps.