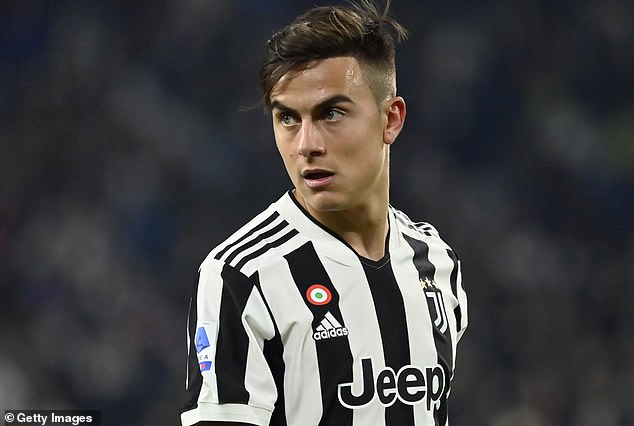 Kylian Mbappe, Paul Pogba and Paulo Dybala are among an incredible 539 players in Europe’s top five leagues with contracts expiring in 2022… and January will be VITAL with players able to talk to other clubs and teams desperate to tie their star men down

By Oliver Salt and Alvise Cagnazzo For Mailonline


An astonishing 539 players throughout Europe’s top five leagues are preparing to enter the final six months of their current contracts, meaning they will be eligible to secure free transfers abroad at the turn of the year.

PSG forward Kylian Mbappe, Manchester United midfielder Paul Pogba and Juventus playmaker Paulo Dybala are just a few of the marquee names on that list – which would go down as the biggest in international football’s long history – with all three players set to become free agents next summer.

In Serie A, a massive 114 players are out of contract in June 2022, including the likes of AC Milan ace Franck Kessie and Napoli star Lorenzo Insigne as well as Dybala.

An incredible 539 players, including Paulo Dybala, are set to become free agents next summer

January will therefore be a crucial month for clubs in possession of these players as they attempt to either tie them down to fresh terms or cash in on them while they still can at a cut-price.

Juve appear keen on the former option in the case of Dybala, who looked all set to put pen to paper on an extension in Turin by Christmas.

A new four-and-a-half-year deal worth an estimated £7million per year was believed to be on the cards, but the Argentina international is still yet to sign off on those terms heading into the new year.

Liverpool are understood to be keeping close tabs on Dybala amid his contractual stand-off with the Old Lady, who would be faced with a crucial decision if an official offer is made next month.

Nevertheless, Liverpool may well decide to bide their time and negotiate a free move which would go through upon the expiry of his contract in the summer.

Mbappe’s future at PSG is also very much up in the air heading into 2022, and Spanish outlet AS claim a final decision will not be made before Mauricio Pochettino’s side face Real Madrid in the Champions League next year.

Madrid are reportedly confident of prising the France World Cup winner away from Paris, a move they can officially arrange from January 1 onwards.

But with Los Blancos set to lock horns with PSG in mid-February and early March, nothing will be signed until their Champions League last 16 battle is complete.

Mbappe’s France team-mate Pogba finds himself in a similar position. Despite remaining United’s record signing at £89.3million, he is six months away from walking out of Old Trafford free of charge.

Sportsmail revealed last month that the 28-year-old was offered an extension by United back in the summer, though after rejecting the terms he is yet to be presented with a new and improved package.

While the player is hoping to stay at Old Trafford beyond the summer, United are running out of time to tie him down to a new deal.

Madrid, former club Juve and PSG have all been tipped to sign him in recent years, meaning a tug of war for his signature could be on the cards in January.

Chelsea defender Antonio Rudiger also looks to be on his way out of Stamford Bridge next summer, with Madrid leading the race to sign him on a free.

Rudiger is said to be demanding double the £140,000-a-week offer Chelsea have put on the table to keep him, which The Telegraph claim Madrid are willing to pay.