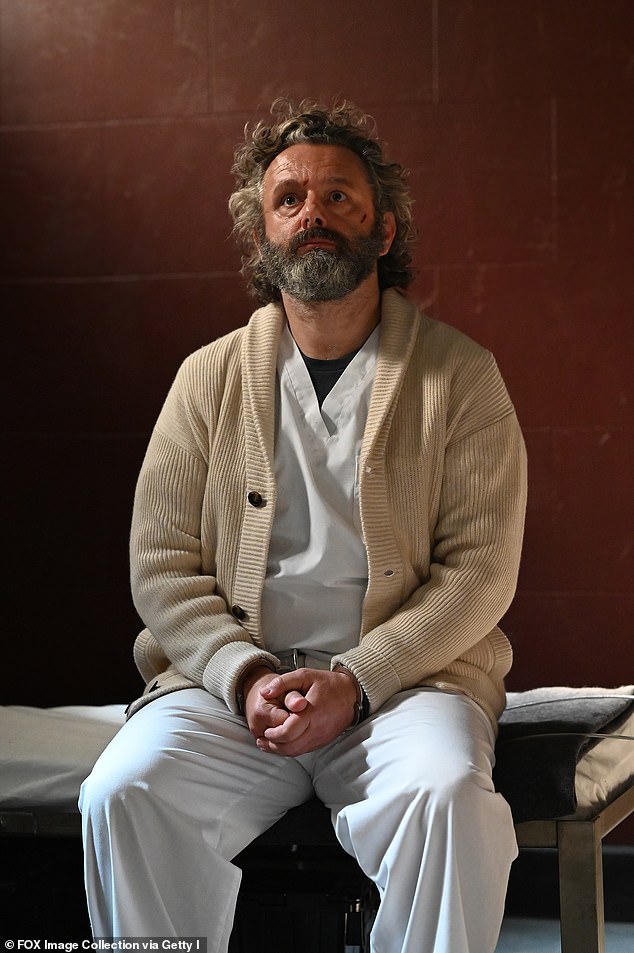 Michael Sheen has told of the heartbreaking chat with a heroic 12-year-old carer that stuck with him and became a ‘fork’ in his life, leading him to selling his homes for charity.

The Hollywood star, 52 – known for playing Tony Blair, Brian Clough and David Frost on screen – had to hide how upset he was getting as the youngster, who cared for her mother and siblings, told him during a break in rehearsals for a performance of The Passion how she was bullied at school.

Award-winning actor Michael was devastated when the young girl did not show up for the final performance in Port Talbot, Wales, because she prioritised taking care of her family.

Moving: Michael Sheen, 52, has told of the heart-breaking chat with a heroic 12-year-old carer that stuck with him and became a ‘fork’ in his life, leading him to selling his homes for charity

Welsh native Michael, whose latest film Last Train to Christmas came out on December 18, described the distressing memory from 2011 as ‘one of the big forks in the road’ for him as he spoke just weeks after declaring himself a ‘not-for-profit actor’.

He said: ‘About a week before the performance I was rehearsing with one group. And there was a young girl, she was about 12, she came up and had a chat with me.

‘And she basically told me that she was a carer, unofficially a carer, for her mother and her younger siblings, and with no sense of self-pity or anything, it was just a fact, she said “and I get very badly bullied at school”.

Emotional: The Hollywood star had to hide how upset he was getting as the youngster, who cared for her mother and siblings

‘And I remember sitting there and listening to her, and trying not to show how upsetting I was finding it, hearing her talk about what her daily life was like.

‘And she also said that, every now and again there was an organisation in the town that was there to help children who were doing the same sort of things as her, to have one night a week where they could go and do something where they didn’t have the responsibilities of that and they could just be a 12-year-old kid really, and they might go bowling or they might go to the cinema, or whatever it might be.

‘And ultimately when we came to do the performance that little girl wasn’t there, she didn’t do it, because her other responsibilities took priority on the day I guess. But I’ve never forgotten her.

Tough times: The young girl told him during a break in rehearsals for a performance of The Passion how she was bullied at school

‘And also how important that organisation she was talking about, what that can do – the difference that can make.’

Michael added: ‘Working on The Passion involved me coming back to Port Talbot a lot.

‘My family have lived here pretty much all my life, and are still here. And so I started to get a really greater and deeper understanding of the sort of work that organisations and people were doing.

‘So I realised a, that that was going on in the community that I grew up in, and I felt shamefully really, that I was unaware of it and ignorant of it.

‘And then also realising how difficult that work is, how challenging it is, and how little support there was for it.’

A few months after the star’s transformative chat with the girl, he discovered the group that helped her enjoy nights out had folded after losing its funding.

Sheen said coincidentally, almost at the same time, came another life-changing experience as he looked at a painting of ‘revolutionary and disruptor’ Jesus while on holiday in Rome.

Doing good: The star decided to sell his homes to raise funds after learning the charity that helped the carer had folded

He told BBC Radio 4: ‘I completely coincidentally went on holiday in Italy, and I went to Rome, and to St. Peter’s Basilica, and I remember being inside there and it was beautiful. I’m not a particularly religious person myself. But I remember being a bit overwhelmed by it really.

‘And I saw there was a little area in the corner that seemed quiet – turned out to be something I later found out to be called St Joseph’s chapel – and there were paintings on the wall.

‘I remember thinking “all these pictures portray Jesus doing something that people are doing in our communities now every day”. And it suddenly occurred to me that the figure of Jesus Christ is actually a symbol of community.’

He said he as always drawn to ‘that Jesus figure as a sort of revolutionary’ and a ‘disruptor’ who made ‘everyone feel very uncomfortable’, adding ‘the idea that that figure is seen as a sort of meek and mild and gentle and nice person has always seemed quite ridiculous to me in a way’.

He said the experiences made him realise he ‘had the urge and the will to do this, and the means, the opportunity’, adding ‘I wouldn’t have that happening at the same time again necessarily, and so I felt an urgency about it’.

He continued: ‘In the years since then I’ve wanted to stay connected to a lot of the organisations and people that I came to know during that time. Mainly it was people would ask will you have a photograph taken to go on our website or to get a little story in the newspaper or whatever it might be, or will you be a patron of this or that.

‘I wanted to do more than that, and so out of that grew then ultimately a desire to make a bigger shift and a bigger change in my life and that’s what I did. And it brought me back to Wales, in the area that I grew up in and trying to do more than just be a photograph or a name on a piece of headed notepaper.

‘I’ve tried to over the last five or six years really. I realised that I wanted to make a shift in my priorities.

‘I wanted to make that the opportunities and the platform and the resources that my career was giving me would go towards working on, and funding and supporting people working on issues that have mattered to me.’

Michael, who starred in Twilight, Good Omens and Frost/Nixon, sold his homes in the UK and America two years ago after funding for the £2million Homeless World Cup in Cardiff fell through and he decided to bankroll the event to save it.

He has pledged to keep using money he earns to fund good causes and is patron of a number of charities.

And he has previously revealed how he quietly handed back his 2009 OBE, after taking a course in Welsh history, stating he didn’t want to be a ‘hypocrite’.

Helping others: He has pledged to keep using money he earns to fund good causes and is patron of a number of charities