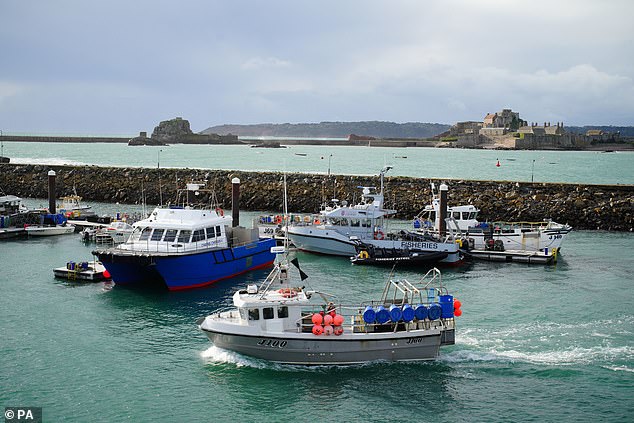 Fishing boat crews must be 70% British: New post-Brexit rules could help create jobs and boost coastal communities… but critics say it ‘feels like rearranging deckchairs on the Titanic’


Fishing boats will need to have crews which are 70 per cent British from April under new post-Brexit rules.

The proportion of fish that must be landed in UK ports is also set to rise to 70 per cent.

The move should help to create jobs and provide an economic boost to the UK’s coastal communities.

The new regulations, which apply to large vessels which catch from the English chunk of the UK fishing quota only, significantly tighten up the ‘economic link’ policy.

This was created in 1999 after the EU’s Common Fisheries Policy brought an influx of foreign-owned boats registering in the UK to take advantage of fishing rights.

Under the current policy boats have to prove they are benefiting, or linked to, the UK economy, by meeting one of four criteria.

Most do so by landing at least 50 per cent of their catch in the UK – but the new rule extends this to 70 per cent for boats using the English quota of fish numbers they are allowed to catch.

The rule for having 70 per cent of crew on a fishing vessel normally living in the UK is another way to satisfy the ‘economic link’ policy. That has also risen from 50 per cent previously required.

The announcement of the new rules, which will take effect from April 1, came as the Government revealed a £75million funding boost to modernise ports and processing facilities, and create jobs.

Charles Clover, an environmentalist and campaigner from the Blue Marine Foundation, said: ‘At the moment boats are fishing quite unsustainably, often without benefit to the UK economy, which these new rules should help to address.

‘However, this feels like rearranging deckchairs on the Titanic given that just a few days ago the Government decided to continue rampant overfishing of already collapsed populations of cod.’

Jeremy Percy, from the Under Ten Fishermen’s Association, representing smaller fishing vessels, said: ‘On the face of it, the additional requirements are beneficial, although many larger English vessels already struggle to attract UK-based crews and will not take kindly to having to donate quota or land catches in the UK when they can get better prices abroad.

‘As the larger vessels which do not manage to land the 70 per cent will have to give parts of their quota to smaller boats, our vessels will welcome this.’

The new criteria apply to vessels more than 32ft that catch more than two tonnes a year from the English quota.

These vessels must currently meet one of the four criteria.

The rules also allow vessels to fish here if they donate part of their quota to smaller in-shore boats, or if they prove at least half their boat’s normal operating expenditure is in UK coastal areas.

This option on expenditure, which was rarely used, will be removed under the new rules. The rise in the proportion of fish which must be landed in the UK will bring economic benefits, said the Government, particularly if fish are processed in the UK.

Under the current policy boats have to prove they are benefiting, or linked to, the UK economy, by meeting one of four criteria

It could add up to £60million a year of additional landings, according to a consultation document – but this is likely to be an overestimate.

If large fishing vessels do not land 70 per cent of fish in the UK, they can choose to make up the difference by giving away more of their quota to smaller boats, which could be worth up to £7.3million a year according to the document.

A £65million infrastructure scheme will help to modernise ports and harbours, and increase capacity and efficiency at processing facilities.

Up to £10million will be used to encourage people into fishing industries and provide extra staff training.