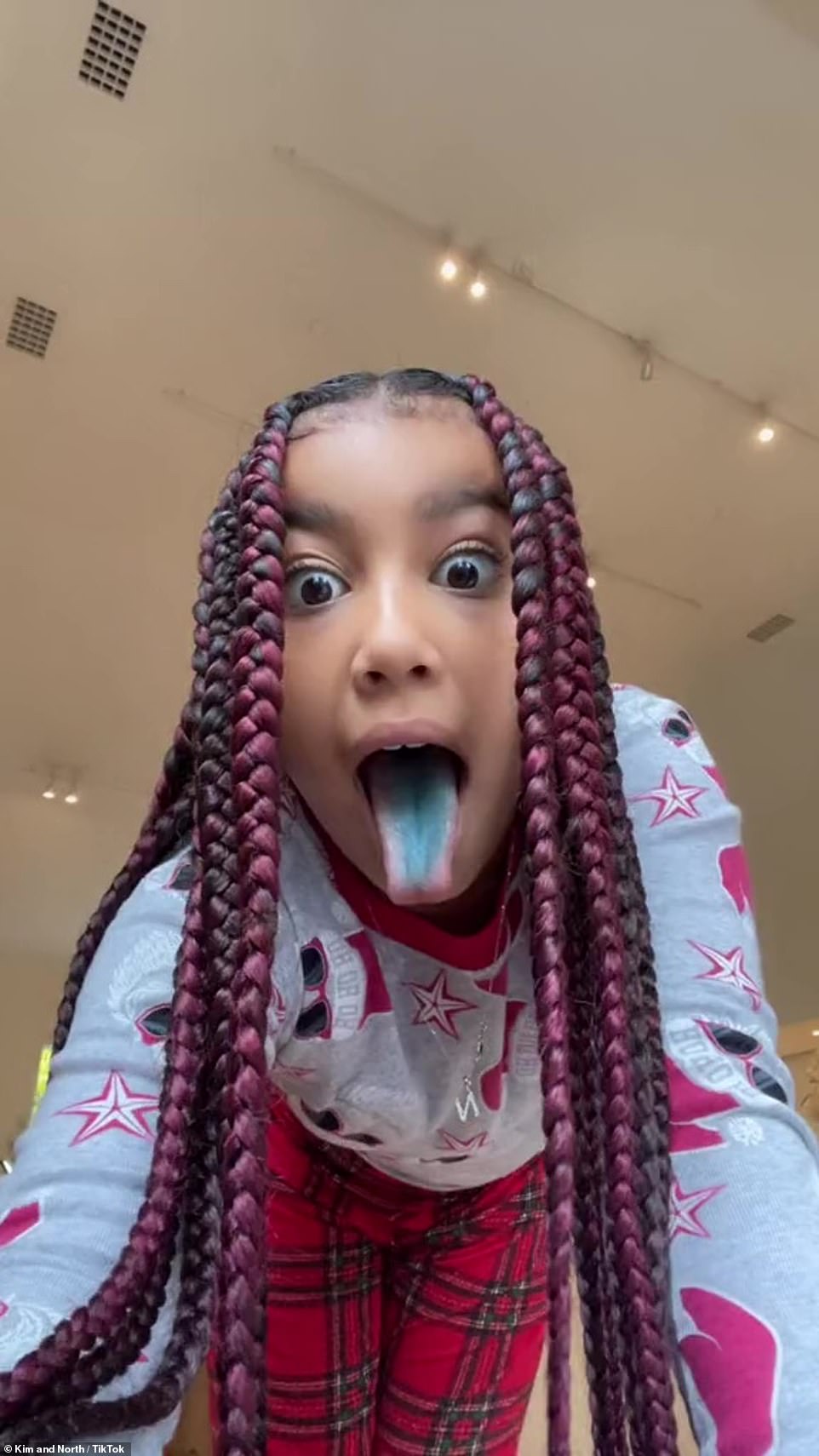 North West continued to post on TikTok — this time with mom Kim Kardashian’s permission — as she shared a selfie-packed video from Christmas.

The eight-year-old posted an animated montage which showed off her many faces, new braces, and ever-changing hairstyles to she and Kim’s joint account @kimandnorth.

North had last made headlines a few weeks ago for going live on the gen Z-centric platform, during which she recorded her mega-famous mom as she quietly relaxed in bed, which caused her to land in hot water.

Versatile! North West, eight, continued to post on TikTok — this time with mom Kim Kardashian’s permission — as she shared a selfie-packed video from Christmas

Among the selfie snippets shared, North was seen with long red-tinged braids in festive Christmas pajamas, as she showed off a bright blue tongue after eating sweets.

Other moments included getting her hair braided, modeling a bright pink turtleneck — which looked to be Balenciaga — and one of her kicking up her leg while standing in their pristine kitchen.

Unsurprisingly, North expertly nailed her angles and even showed off her new braces in a few smiling snaps.

Additionally she briefly shared the spotlight with sister Chicago, three, before sharing some more selfies while walking around the family’s Hidden Hills mansion.

Closeup! Just days ago the daughter of Kim and Kanye West revealed that she had gotten braces which she was keen to show off in a selfie

Selfie queen: The budding starlet proved to take after her mega-famous mom as she expertly mastered the art of the selfie from a few different angles

Getting glam! One snippet showed her getting her hair braided ahead of Christmas

Kim approved! And proving to have her mom’s seal of approval, the firstborn daughter of the reality star and Kanye West also posted a few moments with Kim

Kicking it! North showed off a blue tongue and what looked to be a brand new Christmas present as she flashed white boots while Kim typed on her phone in the background

And proving to have her mom’s seal of approval, the eldest daughter of the reality star and Kanye West also posted a few moments with Kim.

The SKIMS founder threw up her signature peace sign and pursed her lips while wearing plaid pajamas, as they looked to make Christmas breakfast.

The video was shared to the mommy-daughter duo’s shared account — which they launched just one month ago — and the TikTok has already amassed 1.4M likes and 10M views.

Shortly after they launched their TikTok, North had a bit of a mishap as she went live without Kim’s knowledge.

Big sister! In one grab of a new TikTok North looked chummy with her sister Chicago

Mini Kim! Chicago looked every bit like a mini-me of her mother in a cute snap

Sister time: Though North is not always one to share the spotlight, she looked to be enjoying some sweet moments teaching her three-year-old sister about the TikTok world

Big on personality! ‘I mean, North West is Kanye West’s daughter. Forget that — she’s his twin,’ Kim shared of her eldest daughter’s personality and inclination to push boundaries

While giving their now 4.6M followers a house tour, she made her way into the Keeping Up With The Kardashian star’s bedroom which caused Kim to get peeved.

‘Mom, I’m live,’ North was heard telling Kim with a mischievous laugh as she shared a glimpse of her mother relaxing in bed. ‘No stop, you know you’re not allowed to,’ a distressed Kardashian quipped.

Sensing she may have crossed the line, North shot back ‘Okay bye!’ before shutting off the live stream.

But before doing so Kim could be heard asking a friend ‘Is she really going live?’ to which the female voice responded ‘I don’t know.’

Woops! Just last month North got in trouble for going live on TikTok and showing her mom relaxing in bed, causing Kim to snap ‘No stop, you know you’re not allowed too’

Naturally the video went viral, and Kim opened up about the situation during a recent interview — where she also confessed that North was the only person who ‘intimidates’ her.

‘In my household, there are rules,’ she explained to Honestly host Bari Weiss. ‘She did feel really bad about that, and she apologized to me. She said, “I saw on TikTok that I got in trouble and I’m really sorry.” And she got it.’

On her daughter’s natural inclination to ‘push the boundaries’ she remarked: ‘I mean, North West is Kanye West’s daughter. Forget that — she’s his twin. So she will still definitely do all of the above.’

Intimidated: A few weeks back Kim had confessed that North is the only person who ‘intimidates’ her before she discussed the viral TikTok mishap