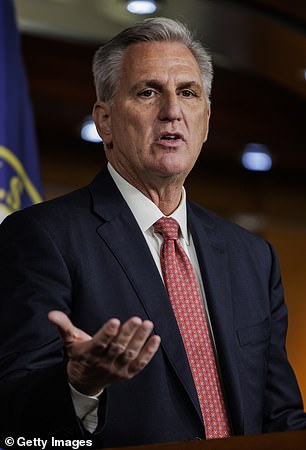 Republicans are the clear favorites to win the House majority in 2022 with at least five Democrat-held seats already leaning towards the GOP, forecaster states


Republicans are in poll position to reclaim the House of Representatives next year, according to new analysis from the respected Cook Political Report, which showed they have decisive edge in some of the critical midterm races.

Three Democratic-held districts ‘lean Republican’ and two more are in the ‘likely Republican’ column,  while only one red seat currently leans blue in the report published on Thursday.

With district boundaries in 19 states still being finalized, it gives Republicans – who need to flip five seats to take the House – an early lead in handing control from Speaker Nancy Pelosi to Kevin McCarthy.

‘Still a long way to go, but Republicans have clear edge for control,’ Dave Wasserman, a Cook analyst, posted on Twitter.

Two safe Democratic seats in North Carolina and Georgia have already effectively been colored red, because of new district lines.

Republicans, led by Kevin McCarthy, are in poll position to reclaim the House of Representatives in next year’s midterms, ousting Nancy Pelosi as speaker

And it comes on top of President Biden’s dire poll ratings, which Republicans will believe will translate into an emphatic rejection of Democratic candidates in November.

The latest analysis suggests Democrats will have to defend more ‘toss-up’ seats that Republicans – eight to six, further making their job harder.

Republicans believe they have momentum as the calendar flips to 2022.

‘We are going to take back the largest House majority in a decade.’

They know that holding the White House, Senate, and House is a recipe for voters to turn against Democratic candidates, and they are further emboldened by strong showings in gubernatorial races in November.

As a result, they added 13 House Democrats to their target list for the midterms.

They hope Glenn Youngkin’s victory over Terry McAuliffe in Virginia, a state that President Biden won by 10 percentage points a year ago, shows they are on course to retake the House in 2022.

It means the National Republican Congressional Committee (NRCC) now has a list of 70 Democrats it believes are vulnerable.

‘In a cycle like this, no Democrat is safe,’ said NRCC Chairman Tom Emmer.

‘Voters are rejecting Democrat policies that have caused massive price increases, opened our borders, and spurred a nationwide crime wave.’