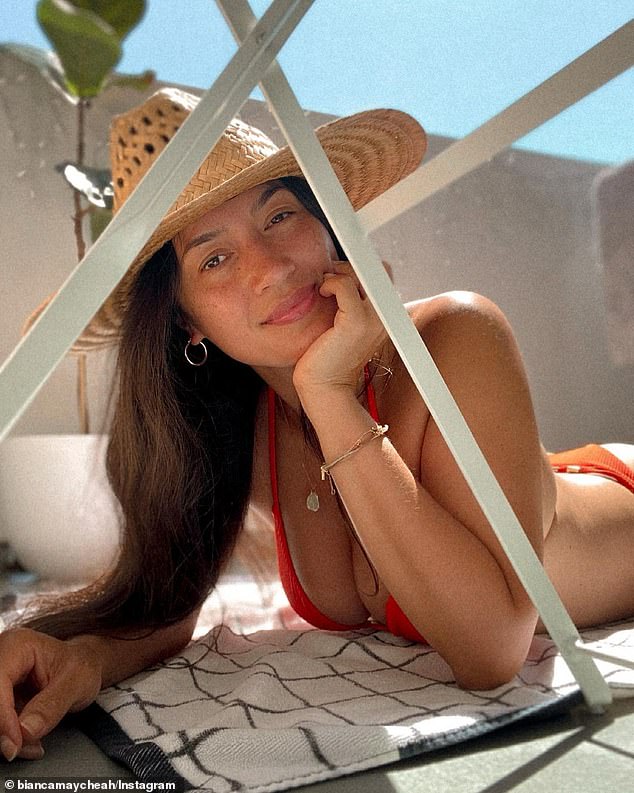 Glamorous model and influencer is ARRESTED and charged with fraud days after posting a cryptic message to her 1.3MILLION Instagram followers about why she’d stopped posting


A glamorous wellness influencer has been arrested and charged with fraud just days after announcing her absence from social media in a cryptic Instagram post.

Bianca Cheah, 40 – who has 1.3 million Instagram followers – was detained by Australian Border Force after flying from Los Angeles and arriving at Sydney Airport at 7.30am on Friday.

Cheah is understood to have been expecting authorities to be waiting for her at the gates before she was then handed over to NSW Police.

She was taken to Mascot Police Station where she was charged with two counts of publishing false or misleading material to obtain advantage.

Bianca Cheah, 40, was detained by Australian Border Force after flying from Los Angeles and arriving at Sydney Airport at 7.30am on Friday

Ms Cheah is seen above with her husband Simon Chalmers. The high-powered couple has since split

The former IMG model had been accused of playing a role in duping investors in her online business Sporteluxe out of $1million.

Just before her arrest this week, Ms Cheah posted to Instagram claiming she was uploading less content than normal as she had chosen to focus upon her family life and her son.

‘Why am I not posting on Instagram as much? To answer your question…at this time in my life, I’ve just chosen to be more present with my darling Olly,’ she wrote.

‘I know this is a finite period in my life and I am choosing to embrace it. I am choosing to find joy in my motherhood journey. I know my little Oliver needs me now in a way he won’t ever again.

‘And I don’t want to miss out on all the beautiful moments right here in front of my very eyes. The ones that many have to sadly miss, and the ones that I never want to take for granted.’

Ms Chea said she had become ‘distant’ on social media but ‘closer’ to her son during her time off.

‘I’m learning from him and his own, unique perspective,’ she wrote.

‘Seeing things through his beautiful lens and thinking about things differently for a change. You see, right now, my Oliver is only little.

‘Right now he needs me. Right now I am his safe place and comfort and his home. That is why, first and foremost, I am defined by my motherhood. Being present is my greatest gift I could ever give to Oliver.’

Two court matters for Ms Cheah had been listed in Manly Local Court days before the post.

Ms Cheah once boasted of being ‘probably the best green juice drinker in the world’.

Her husband Simon Chalmers – who she has split from – ran Kings Cross nightclub Beach Haus, where Leonardo DiCaprio celebrated his 37th birthday.

On Friday, Ms Chea was granted conditional bail following her arrest at Sydney Airport on Friday.

She will appear at Manly Local Court on February 22.

On December 20, two days Ms Cheah published the cryptic social media post, she was listed to appear at court in Manly