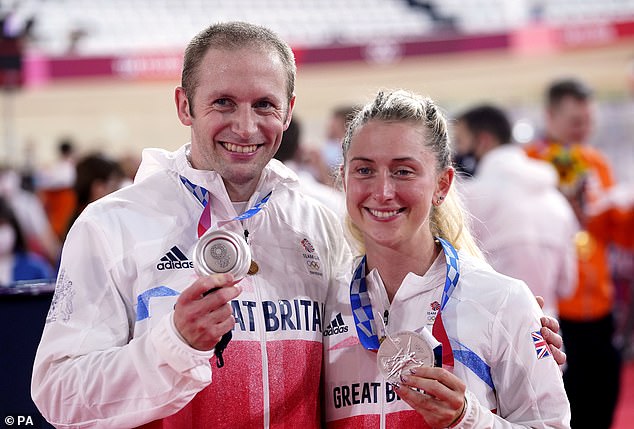 To Britain’s most decorated sporting couple went another level of distinction last night.

To the footballers who took England to the final at the European Championship, further recognition will need to be found outside of the New Year’s honours list.

As tends to be the way in Olympic and Paralympic years, it is from those pursuits that the majority of recipients have been sourced, with the sporting list of 99 led by Laura and Jason Kenny, the married cyclists of Team GB who have been elevated to Dame and Sir.

That follows their latest successes on the biggest stage, with Jason, 33, claiming his seventh Olympic gold in the keirin at the Games in Tokyo, and Laura, 29, her fifth via the madison.

In addition to achieving their aim for 2021 of building a clock out of Olympic gold medals, they are now the first husband and wife to gain knighthoods and damehoods in the same list.

In a joint statement, the couple said: ‘To be included on the New Year’s honours list alongside such esteemed company is something we are both so very humbled by and also very proud of.

‘We have both been very lucky to be able to do a job we both love and there is a whole team of people behind us that make it possible for us to compete at the highest level. We are grateful and thankful to all of them.’

While the merits of handing titles to active athletes is open to some debate, there is little quibbling to be had with this latest layer of recognition for cyclists who individually rank as the first and fourth most successful British Olympians of all time. As a sporting pairing they are without precedent in this country.

If the Kennys have been toasted for the continuation of a remarkable body of work, the year’s most startling individual conquest was also recognised in the form of an MBE for Emma Raducanu, 19.

It followed 12 days after she was named BBC Sports Personality of the Year for her astonishing win at the US Open in September. British sport has never seen a breakthrough quite like it.

Across the list, there were 78 Olympians and Paralympians honoured for their services to sport — one for every gold medallist not previously honoured, and a number of coaches.

Among them, Tokyo gold medallists Adam Peaty and Tom Daley received OBEs for their success in the pool, with the latter also recognised for raising awareness of LGBT issues.

Daley’s performance in taking 10m synchro diving gold with his partner Matty Lee — himself now an MBE — at his fourth Games was one of the tales of the sporting year.

There was an OBE for Hannah Mills, who took her second sailing gold medal in Tokyo and has long campaigned against marine pollution.

The seven-time Paralympic gold medallist Hannah Cockroft was also awarded an OBE, while there was a CBE for Jody Cundy, 43, who added a fifth para-cycling gold in Tokyo to his three para-swimming golds in a Games career dating back to 1996.

Kadeena Cox, who has won Paralympic gold medals in athletics and cycling, was recognised with an OBE, and there was a CBE for Stephen Park, the British Cycling performance director. Along with the Kennys and Park, there were a further nine members of the British Olympic cycling programme on the list.

Park said: ‘Not only are Jason and Laura true masters of their craft, they are also wonderful team-mates, role models and ambassadors for our sport. I’m delighted their remarkable performances have been recognised in the honours list and they should both be incredibly proud of what they have achieved.’

Chelsea Women’s manager Emma Hayes received an OBE for their domestic treble and her work promoting women’s football. It was perhaps a surprise, meanwhile, that of the cohort that took England to the Euro 2020 final, only Gareth Southgate’s assistant Steve Holland made the list.

He received an MBE, but none of the squad featured, despite reaching a first major final since 1966.