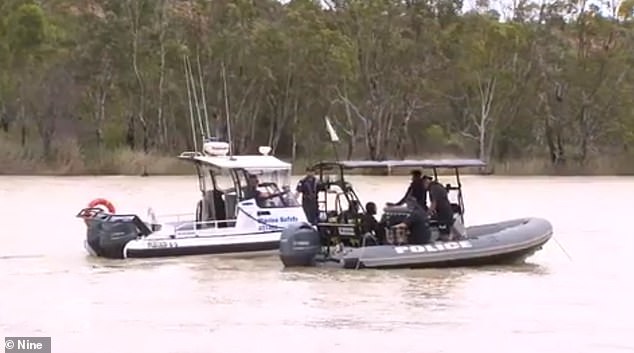 Body of girl, 17, who fell from a houseboat on New Year’s Eve is found in river nearby after frantic search


The body of a teenage girl who fell off a houseboat into the Murray River on New Year’s Eve has been found.

The 17-year-old was discovered south of Swan Reach in South Australia on Saturday after an extensive aerial, land and water search.

The teenager fell into the river about 9.15pm on Friday and the alarm was raised when she did not resurface after the fall, police say.

Police, PolAir and the SES assisted with the search along with members of the public but the girl could not be located.

Police divers have recovered the body of a 17-year-old girl who fell into the Murray River in South Australia on New Year’s Eve (pictured, SA Police search for a missing teen who plunged into the Murray river on Friday evening)

The search resumed on Saturday morning, with police recovering the Adelaide Hills girl’s body about 2pm near where she had fallen in.

Nearby Residents and holiday-makers told The ABC they heard two helicopters in the area last night.

Boater William Hoddle, warned the river contained debris and that the area in which the teenage girl fell was ‘quite a dangerous spot’.

‘That’s why you’ve always got to wear your life jacket,’ he said.

An extensive aerial, land and water search resumed on Saturday before the teen’s body was located at around 2pm south of Swan Reach in South Australia (pictured, the area where the 17-year-old went missing)