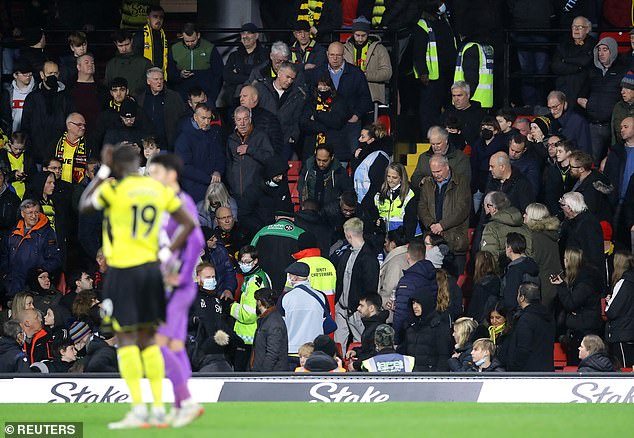 
Watford’s home game against Tottenham was briefly stopped on New Year’s Day after a medical emergency involving a fan in the crowd.

With around five minutes left of the clash at Vicarage Road, play was paused as medics rushed across the pitch to give treatment to the stricken supporter, who was said to have collapsed.

It is the latest incident of medical issues in the stands at football matches – as well as problems suffered by footballers themselves – and is the second time in a month that a fan has had to be treated after a supporter suffered a cardiac arrest during their game against Chelsea on December 1.

The emergency during the game against Tottenham happened with around five minutes to go, with the score level at 0-0, as medical teams from both sides rushed over to offer their aid.

Officials were able to treat the fan and stretcher them off after a relatively short period, with the game resuming and around eight minutes being added on at the end of 90 minutes after the temporary stoppage.

Tottenham went on to win the game 1-0 thanks to Davinson Sanchez’s header in the sixth minute of stoppage time.

The most recent incident will continue fears around collapses in games this year – which started after Christian Eriksen suffered a cardiac arrest in Denmark’s opening game of Euro 2020 this summer.

Since then, Barcelona striker Sergio Aguero was taken off after struggling with breathing problems – and later retired after being diagnosed with an irregular heartbeat.

Wigan forward Charlie Wyke also suffered a cardiac arrest during training before being revived by manager Leam Richardson and a club doctor, while Sheffield United midfielder John Fleck collapsed on the pitch against Reading.

As seen at Vicarage Road, fans have also been affected by collapses – with such an incident first seen during Newcastle’s match against Tottenham in October. Play was suspended in the 40th minute of the game, with an 80-year-old man receiving treatment and later becoming stable in hospital.

Last month a fan at Southampton’s match against Leicester collapsed, on the same day a supporter was treated for a cardiac arrest during Watford’s loss to Chelsea.

The incident at Watford – now the second in the space of a month – saw play stopped in the tenth minute of the game. There was a 30 minute suspension of the match as the fan was treated, before being stretchered out of the stadium and taken to hospital. Thanks to the efforts of the medical staff, he was stabilised.