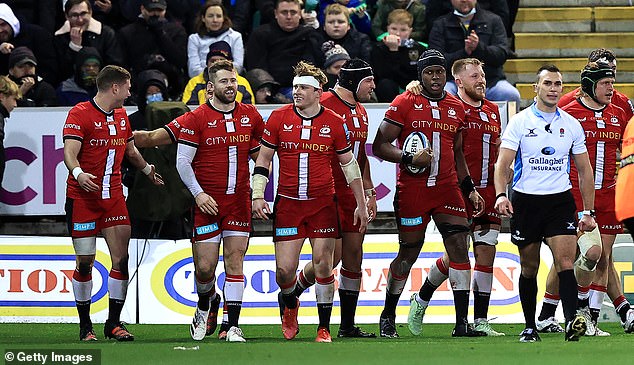 By Sportsmail Reporter For The Daily Mail


Northampton director of rugby Chris Boyd suggested referee Adam Leal ‘didn’t have enough nuts’ to award a penalty at a crucial stage of the 30-6 Gallagher Premiership defeat by Saracens.

Saints dominated the first half at Franklin’s Gardens and were camped in the 22 for an extended period, opting for three successive scrums under the posts as Sarries repeatedly infringed.

But on the third scrum Leal awarded the penalty against Northampton, allowing the visitors to escape and leaving Boyd frustrated.

‘He didn’t have enough nuts did he? I mean it was a clear hinge. There was only one side under pressure in that series of scrums,’ said Boyd.

‘But anyway, I certainly think we took the right option.’

The first half finished 6-6 and when Saracens found a new gear by scoring tries through Alex Lozowski, Tom Woolstencroft and Maro Itoje, they emerged conclusive winners.

Saracens director of rugby Mark McCall said: ‘We showed a lot of fight, grit and resolve. Just a really good, hard-fought away win.’