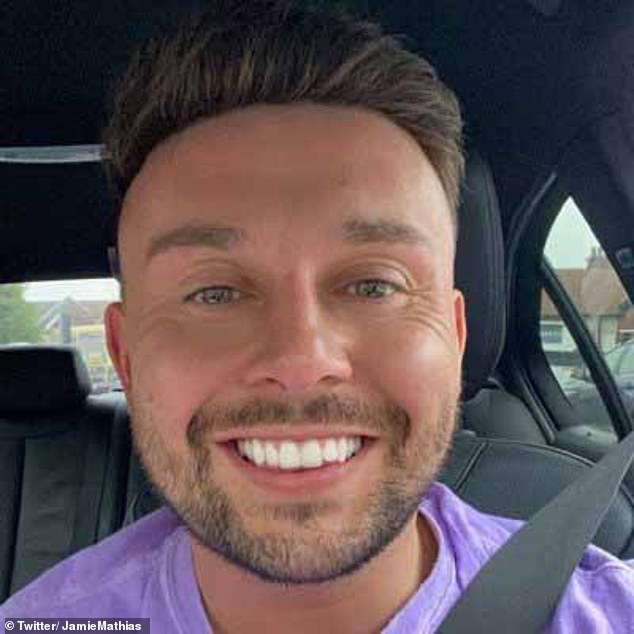 A professional singer who has been asked to perform at a wedding in exchange for social media promotion has hit out at influencers demanding freebies.

Jamie Mathias, who lives in London, explained on Twitter that two influencers with a large following contacted him in the hope that he would perform at their Ibiza wedding for free, as well as writing them a song.

The professional singer said the couple, who he doesn’t wish to name, boasted about the gig being a good opportunity for him because of the number of other social media stars in attendance.

He racked up almost 4,000 comments after the post went viral with many people blasting influencer culture.

Jamie Mathias (pictured), who lives in London, claims an influencer couple asked him to perform at their wedding for free

Jamie, who has more than 14,000 followers on Instagram and an additional 11,000 on Twitter, shared the exchange on both social media platforms.

The initial message read: ‘Hey bro. Me and **** are getting married in Ibiza and we love your personal songs. If you’re free, do you fancy flying out?’

Jamie responded: ‘Hey mate, congrats! I am actually free which is a miracle for next summer. All sounds good! Let me know what you’re looking for I’ll fire some prices over.;

However, the influencer replied: ‘We want one of your songs written for us and maybe an hour set too. But nah G, we’re not really paying the suppliers. We’ll do promo posts and what we charge for promo is worth way more than any track.’

Jamie writes: ‘I’d rather the money thanks though.’

He then pointed out that he’s already succesfully advertising himself, saying: ‘If I needed the promo, how’d you find me?’

Determined, the influencer continued: ‘Bro it’s a wedding with s*** loads of other influencers with big money there, think of the reach!’

Posting on Twitter, Jamie shared a series of messages from the influencers promising to fly him to their Ibiza wedding in exchange for promotional posts on social media

Jamie replied: ‘Ah excellent, a wedding full of other people with lots of money that want me to do s*** for them for free promo! Sign me up bro’

Having racked up over 51,000 likes, the post was flooded with comments from people blasting the influencers.

One person wrote: ‘Influencer culture has to be the modern day snake oil phenomenon. Imagine believing your own self importance and that of those around you to think you no longer have to pay for things because your existence is value in itself.’

Another said: ‘Makes perfect sense. Play for a bunch of freeloaders so that in the future, some more freeloaders will ask you to play for free. The phrase “influencers with big money” suggests this one doesn’t have big money, and it’s all about appearances in front of their wealth mates.’

A third added: ‘I think the only people being influenced by influencers are now other influencers.

A stream of responses to the viral post blasted influencers, while arguing others will expect free performances if Jamie agrees to do the gig

‘It’s about time people stopped calling them influencers, it makes what they do sound more acceptable. The correct name is professional scroungers,’ another added.

Sharing their own experience, one wrote: ‘As a freelancer I have been told this and  fallen for it (in the past). “It’ll be great exposure”, “think of the future work”, “we’ll pay you for any future stuff” blah blah b******. Try getting a plumber to sort under your sink for free if you tell the neighbours how good he was.’