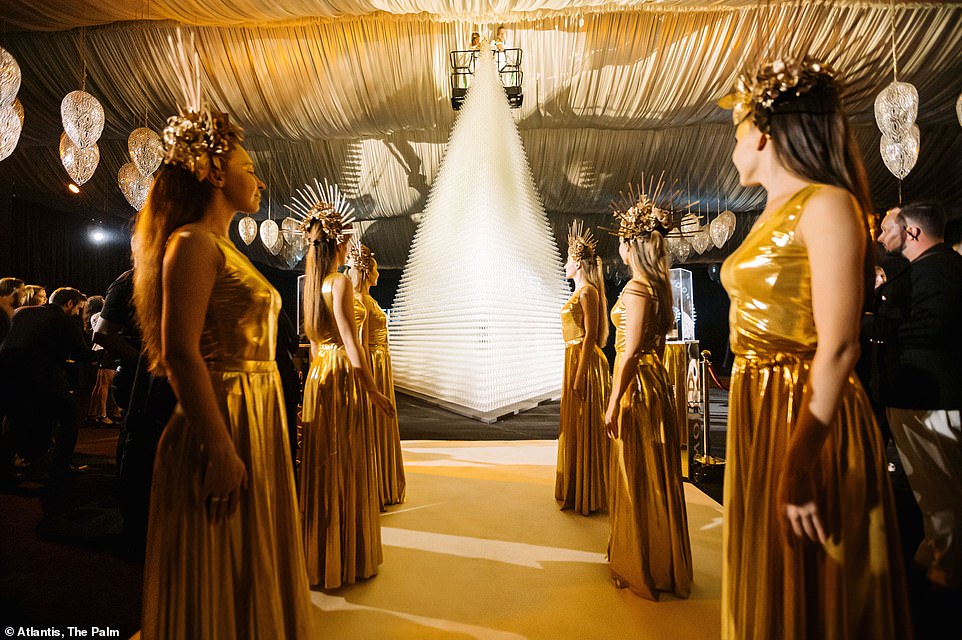 Atlantis, The Palm and Moet & Chandon are toasting being awarded the Guinness World Record for the world’s largest drinking glass pyramid.

A grand total of 54,740 Champagne coupes were stacked atop one another by a steady-handed team of six from the Dutch company Luuk Broos Events to form a 27ft- (8.23m) high pyramid in the Dubai hotel. Moet & Chandon Champagne was then poured over the glittering tower, filling the glasses.

Atlantis, The Palm and Moet & Chandon are toasting being awarded the Guinness World Record for the world’s largest drinking glass pyramid (pictured)

A total of 54,740 glass champagne coupes were stacked atop one another to build the enormous 27ft- (8.23m) high pyramid

The official Guinness World Records listing says: ‘It was a freestanding three-sided solid Pyramid made complete from commercially available drinking glasses. The final act of completing the attempt was to fill the top layer of glasses with a drink.’

A time-lapse video captures the painstaking construction of the glass tower, with the team spending five days and over 55 man-hours stacking the glasses.

It shows a large black triangle mapped out on the floor, with the team carefully placing the glasses down in rows.

The video then shows the team climbing on to scaffolding to stack the higher tiers of glasses. Finally, one team member is seen placing the 54,740th coupe at the tip of the tower.

The unveiling of the tower took place at a December 30 celebration at the hotel’s White Beach club.

Ballerinas ‘draped in glitter and gold’ danced around the tower on the night. Later, guests ‘were invited to sip Champagne on the sandy shores’ of White Beach, ‘before embarking on an immersive experience featuring musical performances and elegant entertainment’.

The Guinness World Record attempt was organised by Moet & Chandon as part of its series of Champagne-themed ’Effervescence’ events, which were held in over 20 cities around the world throughout 2021.

A time-lapse video captures the painstaking construction of the glass tower, which was carried out by a team of six

Once it was deconstructed, all 54,740 coupe glasses were then sent to be recycled by a ‘local glassblower and transformed into refillable glassware for Atlantis, The Palm’s 1,548 rooms and suites’.

On the night, after witnessing the unveiling, Pravin Patel, Official Adjudicator at Guinness World Records, said of the achievement: ‘Huge congratulations to all those involved for achieving the largest drinking glass pyramid.

‘It takes some considerable planning and organisation to pull off a feat of this magnitude. The strict guidelines provided by Guinness World Records has been observed to the letter, and it was a pleasure to witness such a dedicated team at work. Congratulations, you are Officially Amazing.’

Atlantis, The Palm (pictured in the centre foreground) was the setting for the record-breaking attempt

The unveiling of the tower took place at a December 30 celebration at Atlantis, The Palm’s White Beach club

Timothy Kelly, Executive Vice President and Managing Director, Atlantis Resorts and Residences, said on the night: ‘Following what has been a challenging year for us all, it’s a pleasure to stand here today toasting to the dawn of 2022.

‘Tonight, we join our valued partner and fellow masters of celebration, Moët & Chandon, in creating a moment in history, born from our mutual vision of celebrating togetherness. The Champagne tower is traditionally a beacon of greatness and generosity, and we’d like to toast to a new year filled with both in abundance.’

And Laurent Dominguez, General Manager, Moet Hennessy Middle-East, said: ‘A symbol of celebration and generosity, Champagne Pyramids are deeply-rooted in Maison history and DNA. In 1983, to mark its 240th anniversary, Moet & Chandon established the first world record for the highest Champagne pyramid with 2,757 crystal glasses. Almost 40 years later and alongside our valued partner and iconic destination resort, Atlantis, The Palm, we are thrilled to perpetuate this heritage and create a new milestone with this daring attempt.’