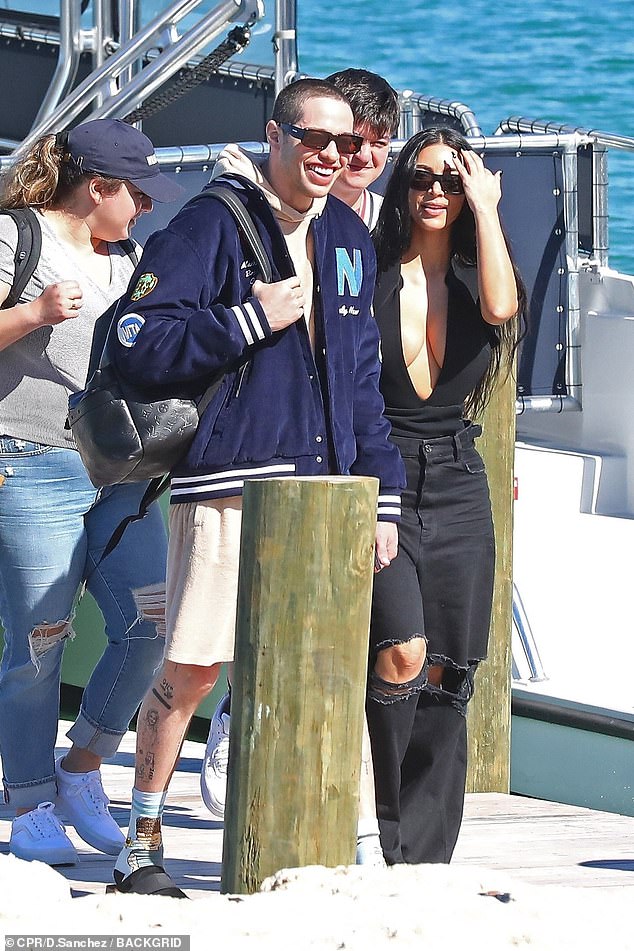 They’ve been going strong ever since striking up a romance late last year.

Now Pete Davidson is getting close to Kim Kardashian’s family.

A source told Us Weekly the SNL star, 28, has ‘bonded’ with Kim’s sisters and mother Kris Jenner.

‘Kim and Pete are very in sync right now. They’re very in step with each other and the relationship is easy. They’re getting closer and closer and are a really great pair,’ the source said, adding they were ‘absolutely getting more serious.’

The comic, however, has not met Kim’s children. The reality star has four children with her estranged husband Kanye West – daughters North, eight, Chicago, three, and sons Saint, six, and Psalm, two.

Kim and Pete have recently returned from their romantic getaway to the Bahamas where they lived it up at the owners-only Baker’s Bay Golf & Ocean Club, a private resort community situated on the Great Guana Cay in the Abaco islands.

Insiders continue to report the couple are getting serious.

A source told E! News: ‘Kim and Pete are getting very serious. He has been hanging out at her house more. She’s smitten and the relationship is very exciting to her.’

Pete lives in Staten Island, while Kim lives across the country in California.

However, the celebrity duo are determined to make their long-distance romance work.

The insider told the website: ‘They are making the distance work, and he’s planning to be in LA more often now.’

The Keeping Up With the Kardashians star’s friends think Pete has been ‘exactly what [Kim] needed’ after her split from Kanye.

The comedian – who has previously dated the likes of Kate Beckinsale and Kaia Gerber – is helping the TV star to move on from her marriage.

Making long-distance work: Pete lives in Staten Island, while Kim lives across the country in California

An insider recently told PEOPLE: ‘He’s exactly what Kim needed after her divorce – someone to make her laugh and just have a fun time with.

‘The end of her marriage was a very dark time for her and Pete has been the best antidote.’

Their vacation comes as Pete finished a hectic holiday season, promoting his New Year’s Eve special with Miley Cyrus, which is rumoured to have caused quite the stir with the couple.

The way they were: Kim was married to Kanye for over six years until filing for divorce last year

It was claimed earlier this week that Kim had unfollowed Miley Cyrus, after the pop stat had put on a flirty display with Pete, and even joked about his ‘big d*** energy’ referencing the size of his manhood.

If that wasn’t enough to contend with, Kim will have also learned about estranged husband Kanye West’s new love interest, actress Julia Fox.

That relationship has already raised eyebrows as Julia, 32, has been pictured having something of a dramatic makeover, as it appears Kanye is styling her.

Fans have already noticed that the rising star is being dressed similarly to Kim, including being draped in Kim’s current favourite designer Balenciaga.

Moving on: If that wasn’t enough to contend with, Kim will have also learned about estranged husband Kanye West’s new love interest, actress Julia Fox