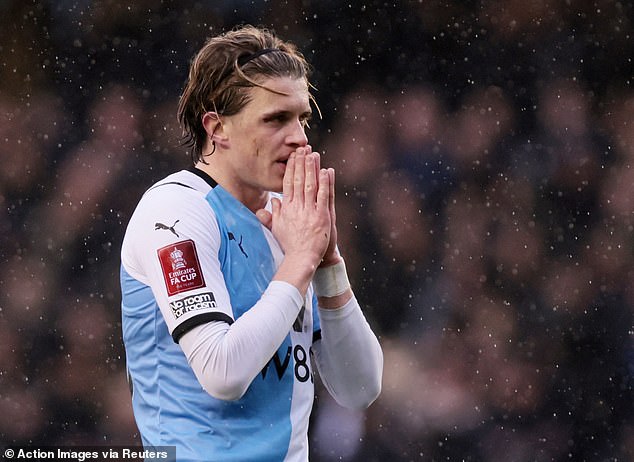 
Millwall have launched an investigation after unsavoury scenes marred the Lions’ 2-1 defeat at home against Crystal Palace in the third round of the FA Cup on Saturday afternoon.

Players who took the knee before kick-off were loudly booed, while Palace winger Michael Olise was struck by a bottle thrown by the crowd in the second half.

‘Millwall Football Club has a zero-tolerance policy against all forms of discrimination and will investigate any incident of alleged abuse accordingly,’ a spokesperson for the Championship club told Sky Sports after the game,

‘As is club policy, any individual found guilty of discriminatory abuse is issued with an immediate lifetime ban.’

There is no love lost between Millwall and Palace, who are separated by little over six miles.

Flares were set off in the away end prior to kick off, while some home fans booed the Palace players who knelt. Millwall players, meanwhile, did not take the knee.

Olise drew Palace level straight after the restart, cancelling out Benik Afobe’s opener, before hitting the post and setting up Jean-Philippe Mateta’s winner with 58 minutes played.

The 20-year-old also found himself on the receiving end of a missile aimed at him by a Millwall fan as he prepared to take a corner in front of the home fans.

‘I don’t think either of the clubs want to see any of those moments off the pitch but I am sure both will deal with those situations effectively,’ Lions manager Gary Rowett said after the game.

‘We as a football club are against any kind of discrimination and of course this is not something we want to see on the field,’ he said.

At the end of November, Leeds issued a statement condemning the fans who targeted Gallagher with homophobic chanting during the Whites’ 1-0 win over Palace at Elland Road.