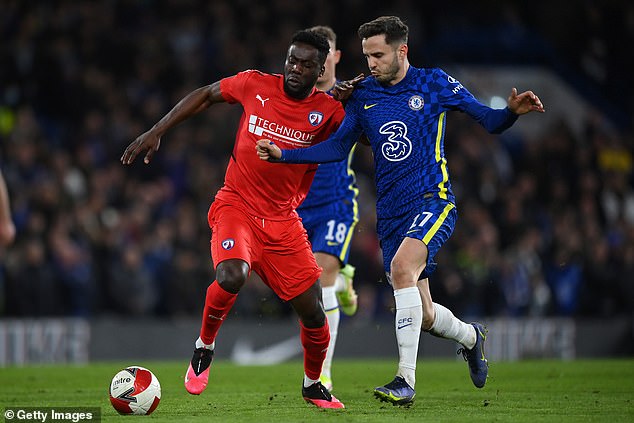 
The progress of Saul Niguez and a bright debut by Lewis Hall supplied Thomas Tuchel with the warm glow of value to accompany Chelsea’s five goals against Chesterfield.

Saul, after a torrid start to his season on loan from Atletico Madrid, featured for the seventh time in a dozen games since the start of December and showed he is finally close to the rhythm of English football.

‘I think so and I hope so,’ said Tuchel. ‘He (Saul) is more confident and in better shape. A huge step forward was the performance against Tottenham in the Carabao Cup.

‘The adaptation has gone further and you can see he is more open, understands more, and has had much more impact than at the beginning of the season.’

Another tonic came from Hall, who became Chelsea’s youngest FA Cup player at 17 years and 122 days.

The versatile academy graduate impressed on the left of a back three and was involved in two of the goals against the National League side.

‘There’s no need to talk it down but no need to get overwhelmed, because we played against a fifth division team,’ warned Tuchel. ‘The young boys have to step up and show what they’re capable of, and they did it again.’

Hakim Ziyech added a penalty but the biggest cheer of the day at Stamford Bridge came when Akwasi Asante scored in front of 6,000 Chesterfield fans in the Shed End.