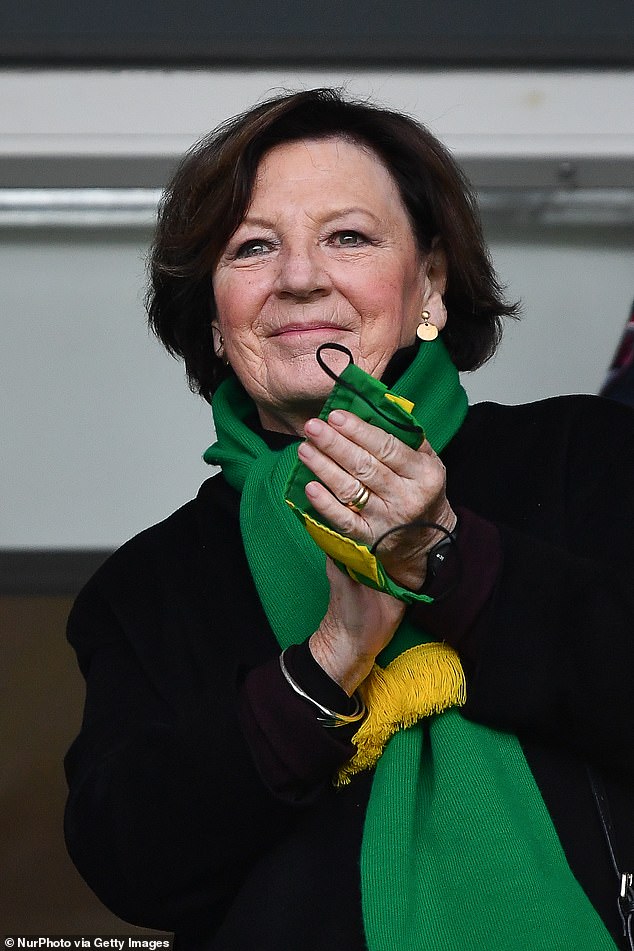 ‘Show a bit of respect to Delia Smith!’ Cookery legends’ fans rush to her defence after frustrated Norwich City supporters call on her to sell shares in the ailing football club


Football fans have rushed to show their support for ‘legend’ Delia Smith, after some Norwich City fans demanded she sell her shares in the club.

The culinary icon, 80, is joint majority shareholder of the ailing Canaries, who are currently sitting at the bottom of the Premier League after losing their last five matches.

Despite the club advancing to the fourth round of the FA Cup after beating League One side Charlton 1-0 at The Valley, a group of frustrated fans protested outside Carrow Road, accusing Delia of having ‘no ambition, and no fight’, and calling for her departure from the club.

The cookery national treasure, who has educated the nation on basics in the kitchen such as how to boil an egg for decades, has seen many take to Twitter to defend her position, saying need to ‘show her some respect’.

Delia Smith is joint majority shareholder of Norwich City, alongside her husband Michael Wynn-Jones. She bought shares in 1996, with Michael coming on board in 1998 – but some fans have called for the cookery icon to leave the club, sparking a strong reaction on Twitter

In 2005, the star showed how passionate she is about the Canaries by famously shouting ‘Let’s be havin’ you’ at fans during half-time of a Premier League game against Manchester City.

Podcaster and author Jake Humphrey wrote of the protests: ‘Delia out? Great idea! To make way for the queue of billionaires ready to bankroll the club… …only, there aren’t any!!!!

‘And if football has taught us anything in recent years it’s that principled, responsible owners are more important than rich ones.’

Another Delia fan said she is not the cause of the club’s performance issues, writing: ‘I agree change is needed for us to progress now, but this isn’t the way to go about it, Delia is a legend, show some respect.’

Norwich player Josh Sargent pictured during the game at Carrow Road today, which the club won 1-0 against  Charlton

Some blamed young fans for having unrealistic expectations, with one Twitter user writing: ‘The sad fact is that this is the outlook most young football fans have. They all want billionaire owners and success EVERY year. They think real life is as easy and unrealistic as playing FIFA or Football Manager.’

Another agreed, adding: ‘Too many people have seen what’s happening at City & want that for their club.

‘The money City have spent has raised levels in the game and in the expectations of the fans to the point of instability. The league is no longer competitive & fans are unhappy their club can’t compete.’

However, others were more sympathetic to the plight of the protestors, with one writing: ‘Them young fans have seen nothing but our club being a complete laughing stock in the top flight, not just getting relegated, but everyone laughing at us. Is it so wrong for them to want more?’

Another added: ‘The fans want them to try and compete. Brentford came up as well. Why is it such a bad thing to want your team to not just get promoted to then go back down. It’s every year.’