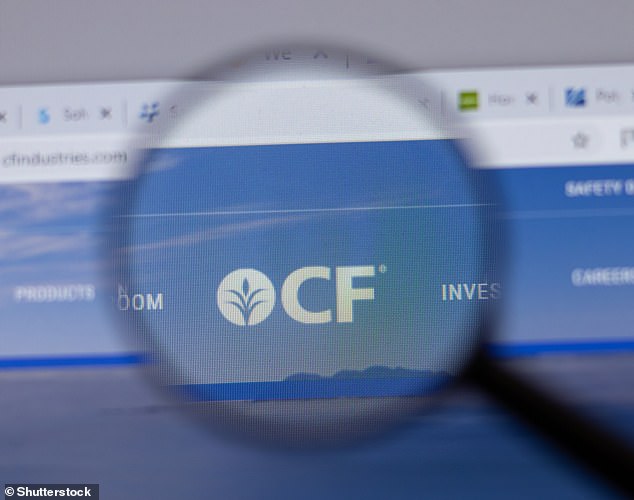 The UK division of fertiliser giant CF Industries – which hit headlines last year when a factory shutdown threatened to cut off Britain’s CO2 supplies – paid out a £4.5million dividend to its US parent group just three months before receiving a bailout from the UK Government.

The payout has been disclosed in the most recent accounts for CF Industries (UK), which closed both its UK plants in September due to the sharp rise in gas prices.

The closures in Billingham, Teesside, and Ince, in Cheshire, triggered an intervention from Ministers, who stepped in to provide CF Industries with a three-week taxpayer-funded subsidy worth tens of millions of pounds to prevent a carbon dioxide (CO2) supply crisis.

Dividend: The payout has been disclosed in the most recent accounts for CF Industries (UK)

CF Fertilisers produces about 60 per cent of the UK’s commercial CO2 needs, such as fizzing drinks, packing fresh food and salads, and nuclear power.

The Government said its arrangement with CF Fertilisers, the details of which have remained secret, enabled the immediate restart of CO2 production. George Eustice, the Environment Secretary, admitted the cost was likely to rise to many millions of pounds and ‘possibly tens of millions’.

Following the end of this short-term partnership, an industry-led agreement was reached in October.

A letter from Business Secretary Kwasi Kwarteng that month said the CO2 industry and CF Fertilisers reached a commercial accord to enable the company to continue operating in the ‘medium term’ while gas prices remained high.

The Government said this would allow the Teesside plant to ‘continue to operate’.

However, CF’s US holding company was less upbeat in November when it said it expected the Billingham facility to maintain operations ‘through at least January 2022’.

Management at CF Industries highlighted among ‘going concerns’ a number of ‘severe but plausible downside scenarios’ given the continued energy crisis, according to the documents filed last month.

In the worst case projection, it predicted that its Billingham plant could face a three-month shutdown, while its Ince facility could remain closed for the ‘foreseeable future’.

Despite the caution, CF Fertilisers UK said in its accounts it could continue to pay dividends for the coming year. CF Fertilisers’ UK-based revenue fell from £358million to £321million in its latest financial year. Its US parent is worth $12billion (£9billion).

When contacted by The Mail on Sunday, CF Industries declined to confirm whether it would continue beyond this month or if an agreement was expected to be reached with Ministers.

A spokesperson said: ‘CF Industries continues to negotiate with our industrial gas customers to extend CO2 offtake and pricing agreements.’

The US holding company has been bank-rolling its UK subsidiary in recent months via an established £75million credit facility, while an additional £25million loan was put in place in late October.

The latest report reveals that CF Fertilisers UK has so far tapped £50million of funds from the £75million pot, while also making use of the entire secondary facility. The company’s most recent withdrawals amounted to £23million in November.

Some 20 per cent of CF Industries’ staff are employed in the UK.