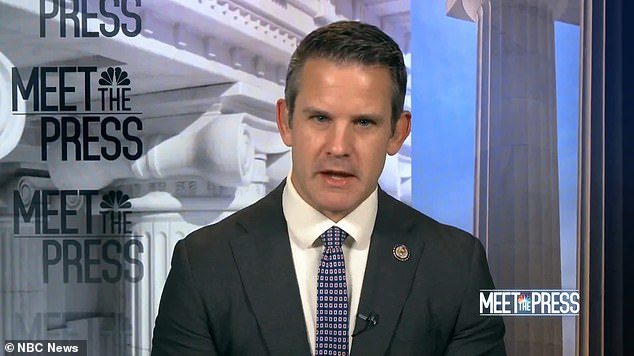 Republican Rep. Adam Kinzinger of Illinois said on Sunday that Donald Trump is a ‘symptom’ of the anger stoked by right-wing talk radio narratives that profit off of fear and victimization.

Speaking to NBC’s Meet The Press, the outgoing GOP lawmaker said the former president’s meteoric rise to power came because he was at the right place at the right time.

Kinzinger also claimed Trump’s enduring grasp on the party is due in large part to House Minority Leader Kevin McCarthy, who paid a visit to Trump’s Mar-a-Lago club days after denouncing his role in the Capitol riot.

‘Did Donald Trump reveal what the Republican party is or change it?’ host Chuck Todd asked.

You know, I think it’s actually a little of both,’ Kinzinger said.

‘So, I think, on the one hand, Donald Trump is a symptom of years and years of leaders, you know, profit-driven radio shows, whatever, turning the base into this angry, fearful, you know, victimized group of people.’

He said those talk radio shows, without naming any hosts or titles, convince their viewers that they can ‘never get a fair shot or that they’re losing ‘more and more political power.’

‘Keep in mind, Republicans still won just about half of all races,’ Kinzinger clarified, before adding: ‘But then Donald Trump came along and, I think unintentionally, because I think he just wanted to be, you know, that guy, unintentionally got in front of the wave where people wanted somebody to blow stuff up.’

‘The problem is leaders have to now interdict this fear and anger cycle and they’re not doing it. They’re instead hiding.’

Kinzinger is one of 10 House Republicans who voted to impeach Trump over the riot. He along with Rep. Liz Cheney of Wyoming are the only two members of the GOP appointed by House Speaker Nancy Pelosi to the committee investigating January 6.

Some Republican leaders in Congress have been accused of flip-flopping on their initial reactions condemning Trump and the Capitol riot in order to please the ex-president.

But hours after Biden’s speech last week denouncing Trump’s role in the insurrection on its first anniversary, Graham released a scathing statement accusing Biden of ‘politicizing’ the riot.

And Kinzinger accused McCarthy of lying on Sunday when he recalled the House GOP leader painting the January 2021 visit to Trump’s Florida retreat as a mere coincidence.

‘January 7th, I’ll tell you, within my Republican Caucus, there was a lot of silence, a lot of discussion — where do we go from here, this was wrong,’ he said, describing the immediate fallout after the insurrection.

He said McCarthy told colleagues his January 2021 meeting with Trump (pictured) was a coincidence, though Kinzinger claimed that was a lie

‘And something happened two weeks later, which is Kevin McCarthy went to Mar-a-Lago. And it caught everybody off guard, they were shocked.’

He then referenced a photo released by Trump’s team after their meeting of the two side-by-side. It was the first official photo of the former president since he left office.

‘But in that picture he had with Donald Trump, and I think Kevin had told us something like, “Oh, I just happened to be in Florida and he wanted to meet, so I want as going to meet with him.” No, that was an intentional meeting,’ Kinzinger said.

He said the meeting ‘resurrected Donald Trump back to life.’

‘And I think when history looks back, it’ll be Kevin’s meeting with Donald Trump which actually made him as immediate of a force as it was. He may have come back, but I think that was a very important meeting,’ Kinzinger said.

McCarthy and Trump met the month before the ex-president’s historic second impeachment trial in the Senate. At the time it was still possible that enough Republicans would come on board to convict him.

Immediately after the riot, McCarthy stood on the House floor and said Trump ‘bears responsibility.’

He released a statement following his meeting with Trump calling on Republicans to band together against the ‘radical Democrat agenda.’

‘Today, President Trump committed to helping elect Republicans in the House and Senate in 2022. A Republican majority will listen to our fellow Americans and solve the challenges facing our nation,’ McCarthy said.

‘Democrats, on the other hand, have only put forward an agenda that divides us — such as impeaching a President who is now a private citizen and destroying blue-collar energy jobs.’

News of the meeting first emerged after reports revealed Trump called McCarthy a ‘p***y’ for placing any blame on him for having a role in last year’s riot.