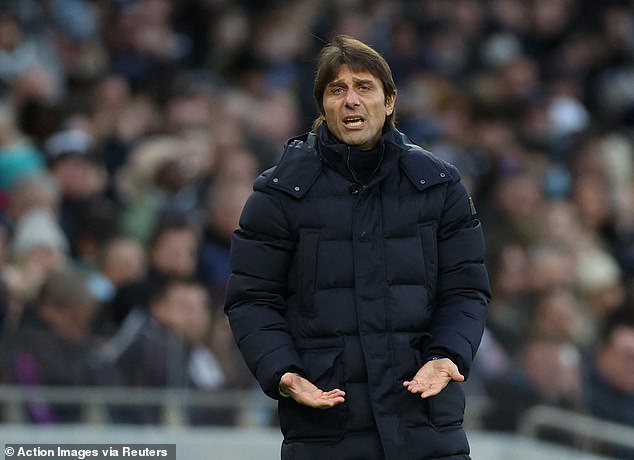 ‘We must not be happy’: Antonio Conte disappointed with Tottenham’s FA Cup display against Morecambe as they have to come from behind to progress… but Spurs boss defends Tanguy Ndombele as he’s booed off by fans


Antonio Conte couldn’t hide his disappointment at Tottenham’s performance despite a sluggish victory over Morecambe.

Having fallen behind to Anthony O’Connor’s first-half effort, Spurs scored three goals in the final 15 minutes to avoid embarrassment against the League One side in a game they looked like losing for so long.

But Conte – played down the boos that greeted Tanguy Ndombele’s substitution – said: ‘At the end, I think we have to be a bit disappointed because I think we can do much better.

Antonio Conte was disappointed with his players’ performances against Morecambe

‘But our target in the end was to go to the next round and give a chance to players who didn’t play so much in the last period.

‘Our target was to give rest to players who have played a lot of games in this busy period. In the end, it’s OK. We mustn’t be happy, for sure, but we reached the target and that’s all.’

Meanwhile, Ndombele’s future at the club is under an even heavier cloud after he was jeered after being replaced in the second half.

The midfielder slowly trudged off the field before heading straight down the tunnel, much to the home crowd’s annoyance.

Conte added: ‘This type of situation happens in football. You have to be good to try to change your opinion if someone is disappointed with you. It’s normal.

‘I was a player and it happened sometimes to me that someone was unhappy with my performance. This is our life. We have to continue to work and try to be better next time.

Morecambe assistant boss Diarmuid O’Carroll said: ‘The boys did themselves proud and did themselves justice. Everyone would’ve gone home happy and they can be proud of their efforts.’