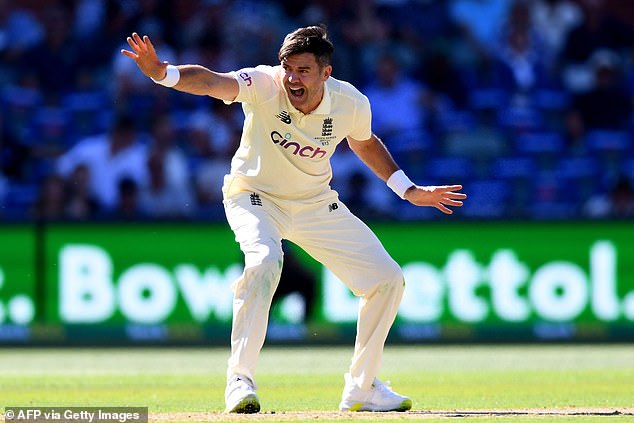 
Former England captain Michael Vaughan has called for England to bring the curtain down on Jimmy Anderson’s glittering Test career after the Ashes tour in Australia is over.

The fifth and final Test starts on Friday in Hobart with England looking to continue their efforts to salvage some pride after drawing the fourth Test.

But Joe Root and his men will return home to intensifying scrutiny after what has been a miserable tour, with Australia mercilessly sweeping England aside in the first three Tests to clinch series victory.

Vaughan has called for England to make a bold move and part ways with 39-year-old Anderson – the third-highest wicket taker in Test history – and build for a new era with the likes of Olly Stone and Saqib Mahmood getting a sustained run in the team.

‘Managing Jimmy’s retirement is going to be key to this team moving forward. His future is the big elephant in the room,’ Vaughan wrote in The Telegraph.

‘England cannot move on and be a world force with Anderson at the helm. I love watching Jimmy bowl. He is a poet with the ball in hand. He could still be England’s best bowler for another two years.

‘Warne and Glenn McGrath retired with one or two years of high level cricket still left in them. Just because you can still perform does not mean you should keep going on and on.

‘Eke out every ounce of knowledge from Jimmy about how to bowl at this level and keep him involved but bowlers like Saqib Mahmood and Olly Stone need a run in the team.

‘There will be around 60 Tests before England play in Australia again. Are we going to come back here and win with guys who have played only five or 10 Tests? No.’

Anderson, who turns 40 next July, made his Test debut in 2003 against Zimbabwe when Vaughan was in the team – before the Yorkshireman succeeded Nasser Hussain as captain.

Anderson saw off the final ball of the fourth Test to help England claim a draw against Australia and erase fears of a whitewash.

He admitted he was ‘quietly confident’ about batting out a draw once he knew Steve Smith was bowling.