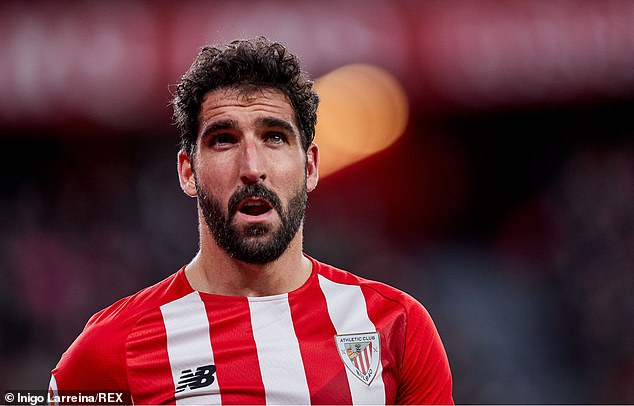 
This week’s Spanish Super Cup in Saudi Arabia has been heavily criticized by Athletic Bilbao midfielder Raul Garcia, who will play in the one of the competition’s semi-finals on Thursday.

The former Spain international said: ‘It doesn’t make a lot of sense. It’s very simple: we are playing a tournament that is (normally) played in our own country and it doesn’t make sense to play it anywhere else.

‘It makes no sense to play a game there (in Saudi Arabia) that could be played here.

‘Football has changed in the sense that no one thinks about the fans. What matters is generating (money) getting sponsors, and we are forgetting the basics regarding what football is. The atmosphere, families enjoying games together, kick-off times that suit spectators. It’s changed a lot since I started playing.’

For 40 years the Spanish Super Cup was a Spain’s version of the Community Shield played as a curtain raiser to the new season between the previous campaign’s cup winners and the league champions.

But in 2019 the format was changed to four teams, including cup and league runners up, and the tournament was exported to Saudi Arabia. In 2020 Real Madrid won the first revamped Super Cup in the King Abdullah Sports City.

Last season the Final Four returned to Spain because of the pandemic, but this year it goes back to Saudi Arabia.

Real Madrid play Barcelona on Wednesday and Atletico Madrid play Athletic Bilbao on Thursday ahead of Sunday’s final in the The King Fahd Stadium in Riyadh.

The Spanish Football Federation originally agreed a three-year deal for the Super Cup in Saudi Arabia reportedly worth 30m euros. That agreement has since been extended to 2029.