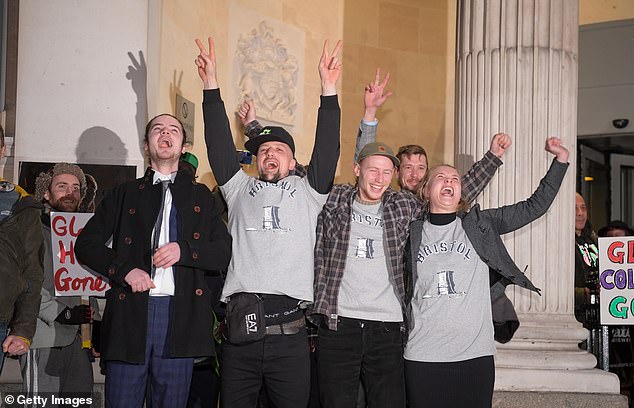 The Attorney General is ‘a disgrace’ for saying she might send the Edward Colston statue case to the Court of Appeal, critics have said, after a jury cleared four demonstrators who toppled the slaver’s monument of criminal damage.

Suella Braverman said she was considering referring the case so the law can be ‘clarified for future cases’ on Friday after stating the decision was ‘causing confusion’.

Rhian Graham, 30, Milo Ponsford, 26, Sage Willoughby, 22, and Jake Skuse, 33, were charged with pulling the statue down during a Black Lives Matter protest on June 7, 2020 in Bristol while a huge crowd was present, but were cleared of criminal damage last week.

The verdict has prompted debate after the ‘Colston Four’ opted to stand trial in front of a jury and did not deny involvement in the incident, instead claiming the presence of the statue was a hate crime and it was therefore not an offence to remove it.

However, retired judge and chair of the Society of Black Lawyers Peter Herbert has said the Attorney General’s potential intervention ‘smacks of institutional racism’.

He told The Independent: ‘The Court of Appeal has no role to play in this acquittal … Her involvement smacks of institutional racism, demonstrating the need to defend the narrative of slavery and oppression, the direct link to colonialism, and therefore to present day injustices.’

Attorney General Suella Braverman, MP for Fareham in Hampshire, said she was considering referring the case so the law can be ‘clarified for future cases’

His comments follow a tweet from Shadow Attorney General Emily Thornberry on Friday in which she described Ms Braverman’s intervention as ‘shameful’.

She added: ‘The Attorney General has a duty to uphold democracy, the rule of law and the sanctity of the jury system, not play political games when she doesn’t like the results.

‘I hoped Suella Braverman had learned a lesson after her shameful intervention on Barnard Castle, but clearly not.’

In his closing speech at the trial, barrister Liam Walker, representing Mr Willoughby, told the court: ‘Make no mistake, members of the jury, your decision is not just going to be felt in this courtroom or this city.

‘It will reverberate around the world. I urge you all to be on the right side of history.’

Mr Walker, a leading barrister from Doughty Street Chambers, then had to apologise for his remarks after Judge Peter Blair QC raised concerns.

The judge subsequently told jurors to decide the case on the basis of the evidence they had heard, after raising worries in their absence that undue pressure was being placed on them by excessive rhetoric from defence barristers.

Following the verdict, Ms Braverman tweeted: ‘Trial by jury is an important guardian of liberty and must not be undermined. However, the decision in the Colston statue case is causing confusion.

‘Without affecting the result of this case, as Attorney General I am able to refer matters to the Court of Appeal so that senior judges have the opportunity to clarify the law for future cases. I am carefully considering whether to do so.’

Concerns over the acquittal were shared by some Tory MPs, though several lawyers have dismissed claims that the verdict set a legal precedent which could give rise to other public monuments being defaced.

After being cleared, the Colston vandals stood outside court alongside protesters carrying banners boasting ‘We toppled Colston’.

By Isolde Walters and Jake Ryan for The Mail on Sunday

The bronze sculpture bears the red and blue graffiti from the Black Lives Matter protest in June 2020 when it was torn from its plinth in Bristol city centre, rolled through the streets and dumped in the harbour.

Museum visitors can view the statue, but only by booking a place on a once-a-day behind-the-scenes tour. Those hoping for commentary on the controversial effigy will be disappointed.

The bronze sculpture bears the red and blue graffiti from the Black Lives Matter protest in June 2020 when it was torn from its plinth in Bristol city centre, rolled through the streets and dumped in the harbour

The volunteer guide who last week conducted a tour admitted: ‘I’ve been given a long list of things I can and can’t say, so I’m not going to say anything at all.’

Staff at the M Shed museum, which celebrates Bristol’s history, last week removed the statue from general view – a decision that, according to the museum, was in line with a visitor survey.

It was put in the store room of the adjoining L Shed just days before four activists seen on CCTV looping ropes around the monument and pulling it down were cleared by a jury of criminal damage.

Amid claims that the verdict had created a ‘vandals’ charter’, Attorney General Suella Braverman is considering referring the acquittal to the Court of Appeal.

The ‘Colston Four’ – Sage Willoughby, Rhian Graham, Milo Ponsford and Jake Skuse – are believed to have received legal aid to fund at least part of their defence.

A GoFundMe page for the ‘Bristol Topplers’ Defence Fund’ sought donations towards ‘legal fees not covered by legal aid’ and raised £13,500.

Museum visitors can view the statue, but only by booking a place on a once-a-day behind-the-scenes tour

Colston, a 17th Century merchant, made a fortune trading slaves but went on to donate so much money to philanthropic works in Bristol that his name appeared throughout the city on streets, schools and a concert hall.

The Government wants to increase the maximum sentence for damage to memorials or statues from three months to ten years, but experts fear it could lead to more acquittals.

‘All of the cases for damaging public monuments would be in front of a jury at Crown Court because the sentence would be raised to ten years so we will see a lot more of this.’