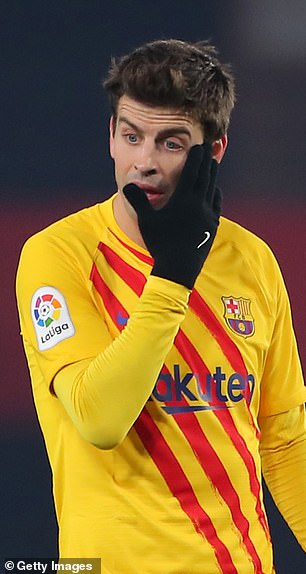 Gerard Pique goes on the warpath AGAIN as he savages moaning Unai Emery for complaining about decisions for ‘THREE YEARS’, days after posting his wages online in feud with Spanish journalist


Pique has become embroiled in yet another war of words – this time hitting back at Villarreal boss Unai Emery after the Spanish coach told him to ‘stop deceiving people’ following his criticism of Real Madrid.

The Barcelona defender had backed up claims Valencia were ‘robbed’ in their 4-1 loss to Los Blancos, but Emery was far from pleased with his views – accusing him of hypocrisy after he allegedly handballed against his Villarreal side earlier this season.

The Catalan outfit won 3-1 against his team in November, with the incident involving Pique one of the major talking points, and Emery questioned why the Spaniard had not spoken up about it but was keen to highlight how Madrid had benefitted from refereeing decisions.

Emery said in a press conference: ‘Pique yesterday took to Twitter to talk about refereeing in the match between Real Madrid and Valencia match.

‘But he forgot that there was a clear penalty for us that was not called when he saved the ball with his hand in the penalty area against us.

‘Instead of staying silent, you have to be honest and not deceive people.’

The comments sparked an angry response from Pique on Twitter, with the World Cup-winning star pointing out that Emery had a history of complaining about decisions, saying he had still been discussing refereeing calls from PSG’s 6-1 defeat to Barcelona three years after the match had taken place.

‘This is a person who three years later was still complaining about the referee in the 6-1. Get over it, Unai.’

Pique told Emery to ‘get over it’, referencing his complaining about PSG’s 6-1 loss to Barca three years after the match had taken place

Pique has been on something of a warpath in recent weeks after furiously hitting out at Spanish journalists who claimed he was the club’s top earner.

He went to extraordinary lengths to prove this was not the case – incredibly posting his payslip on social media to show that he had actually earned just £2million in six months.

The Barcelona defender was accused of clearing €14million (£11.7m) a season from the crisis club, by Catalan television presenter Lluis Canut.

Pique tweeted: ‘People like this are paid by public television to defend their friends. Here is 50 per cent of my salary as of 30 December. Have a bit of respect for yourself.’