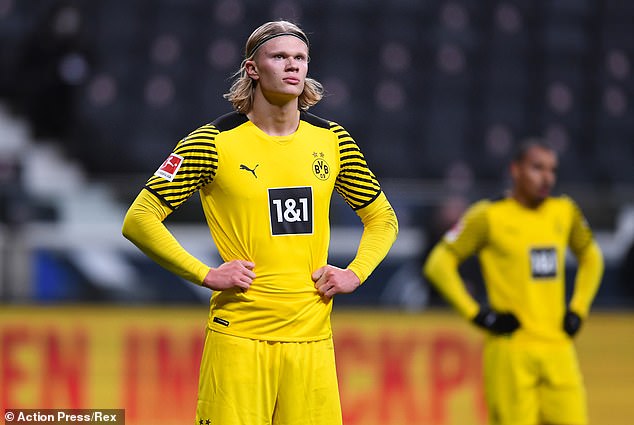 Borussia Dortmund are optimistic of keeping star striker Erling Haaland, insists club chief Sebastian Kehl… just days after their CEO said ‘it will be difficult to keep him’ beyond the summer


Borussia Dortmund are trying to persuade Erling Haaland to stay at the club and are optimistic about their chances of doing so, according to club chief Sebastian Kehl.

The 21-year-old Norwegian has scored 76 goals in as many games across all competitions for the Bundesliga outfit since joining from Red Bull Salzburg in January 2020.

His scintillating form has drawn interest from Europe’s most distinguished clubs, including Real Madrid, Barcelona and Manchester City.

Borussia Dortmund are optimistic about their chances of keeping Erling Haaland

Haaland has the option to leave Dortmund in the summer when his £64million release clause becomes active, but former midfielder and club captain Kehl remains hopeful that their prized asset will stay at Signal Iduna Park.

Kehl – who will succeed Michael Zorc as Dortmund sporting director in the summer –  told reporters: ‘The plan is that when the time comes, we will get together and sit down at the table.

‘But we are not going to announce when we will do that right now. What is clear, however, is that we are trying to achieve clarity.

‘We are trying to persuade Erling to continue to play for Dortmund, and I don’t think our chances are too bad.’

Speaking at a press conference last week, the 41-year-old – who played 31 times for Germany – added on Haaland’s future: ‘The situation is very clear, he has the opportunity to get out [of his contract in the summer].

‘There are certainly a few more reasons why Haaland is in very good hands at Borussia Dortmund and why we as a club can continue to be a very good option for him.

‘We will sit down with Erling and his team in the next few weeks and discuss the situation intensively. It would be good if a decision doesn’t drag on forever.’

But Kehl’s latest quotes represent a more optimistic outlook on Haaland’s future at Dortmund than the one provided by chief executive Hans-Joachim Watzke at the weekend.

Watzke said in an interview with Der Spiegel, as per Marca: ‘Who would give one of the best strikers in Europe away in the winter market if they didn’t have to?

‘He will not leave in January. Dortmund is still in three competitions and we want to compete with the best teams.

Reports in Germany suggest that Real Madrid are the preferred destination for Haaland, who would like to follow in the footsteps of Cristiano Ronaldo.

It leaves Dortmund looking to fill the void the striker will leave, and reports suggest they are set to turn to another Red Bull Salzburg product in 19-year-old Germany international Karim Adeyemi.