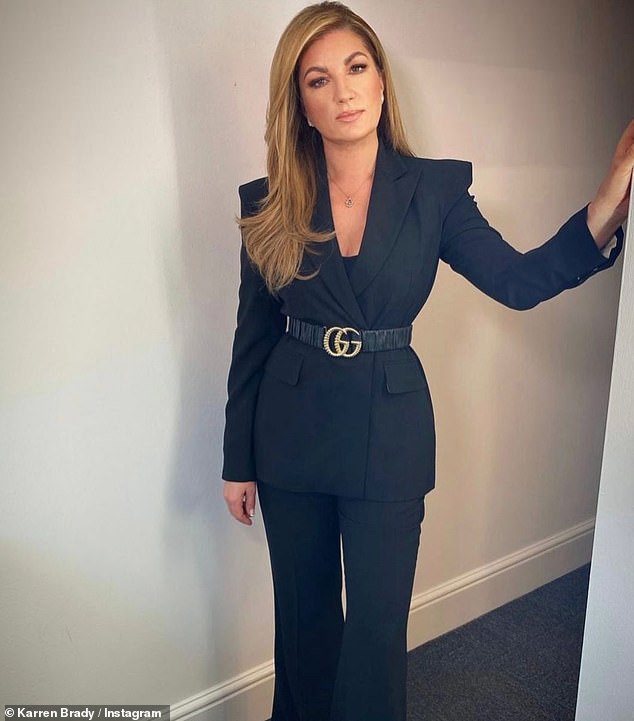 Karren Brady has opened up about dealing with the menopause over the past few motnhs as she declared her husband would say she has been a ‘nightmare’.

The Apprentice star, 52, admitted while she has got off lightly so far, she has been suffering hot flushes and waking up ‘soaking’ up to three times during the night.

Karren revealed her symptoms began after she wrapped filming on the most recent series of Alan Sugar’s BBC show, which aims to find his latest business partner.

Honest: Karren Brady has opened up about dealing with the menopause over the past few motnhs as she declared her husband would say she has been a ‘nightmare’

During a new interview, she said: ‘I started the menopause after we had finished filming, so I didn’t have any effects, and then I started it (menopause).

‘So other than the hot flushes and forgetting the occasional thing – I’m ok at the minute, but I suspect it’s going to get a hell of a lot worse, before it gets any better.

‘My husband will tell you I’ve been a nightmare, but I think I’m fine.’

Karren went on to discuss how she backs Penny Lancaster’s campaign for women to receive more support in the workplace if they are struggling with the menopause.

Symptoms: The Apprentice star, 52, admitted while she has got off lightly so far, she has been suffering hot flushes and waking up ‘soaking’ up to three times during the night

When asked if they should be allowed time off, Karren said: ‘If they need it. My mum said to me, oh in my day – we just battled on, but just because you can battle on, doesn’t mean you should.

‘To be honest, I haven’t even considered HRT at the minute because I’m only in the beginning of it, but I’ve got to say, waking up three times a night soaked is not very good.

‘When you think about it, we’re the ones who have to have the babies, the periods, the menopause and it’s really unfair.

Karren, who shares children Sophia and Paolo with her Canadian football manager Paul, said: ‘My husband would say the unfairest thing is being with someone who has to go through all those things.

‘I think lots of companies are helping people with the cost of menopause, including pills if they need them, and I think Penny’s helped, and there are lots of campaigns in the media that have really helped.

Candid: Karren revealed her symptoms began after she wrapped filming on the most recent series of Alan Sugar’s BBC show, which aims to find his latest business partner

‘Davina [McCall’s] experiences through it have really helped raise the issue, and it’s something that happens naturally and something that every woman has to go through at some point in their life.

‘Touch wood, and I’m touching as much wood as I can, that I’m not as bad as some stories that I’ve heard, but I don’t know if it’s going to get worse, or if I’m through it.’

The Apprentice returned to British screens last Thursday following two years off air due to the coronavirus pandemic.

Karren, who said she will leave the show when Lord Alan does, explained what she thought the worst task was this series.

She said: ‘The task was Alan sent them to Wales to do a promotional video, and the team I was following did an event to showcase and sell tickets for, and they happened to choose Europe’s highest and longest zip wire, and I’m terrified of heights, but because I have to go wherever they go I had to follow them down the zip wire.

‘It was pouring rain, freezing and I think at that point I would have happily thrown myself off. And the worst thing about the zip wire is that you do have to jump off – it’s a bit like a bungee jump.

‘And then we had to go down a mine – right the way down. It was hundreds and hundreds of metres down, and of course you’re soaking wet, and it was freezing cold, so it was one of those days, if you know what I mean.’

Karren said that although it wouldn’t be ‘impossible’ to do the show without Lord Sugar, it wouldn’t be the same without the notoriously tough businessman.

She said: ‘I think when he’s finished with it, the show will finish with it. I think he’s got great energy for it, and he still loves it.

‘I don’t think it’s impossible, but I don’t think it would be anywhere as good. Alan’s honest, authentic and he speaks the truth. It’s not an act – what you see, is what you get. It’s not a scripted show, and no-one tells him what to say.’

She concluded that when Alan leaves the show then so will she.

Karren also brushed off any suggestion that she would go on to launch her own spin-off show when she eventually does leave the reality programme.

She said: ‘I think what a lot of people don’t realise is that I have a full-time job. I’m the CEO of West Ham, so I can just about scrape six weeks off in the summer when there’s no football, and when we do our filming, so I don’t think I could fit in anything else.’

Family: Karren now has two grown up children in their twenties who have moved out, so no longer experiences ‘mum guilt’, but revealed it is something she’s had in the past (pictured with her family in 2014)

Karren now has two grown up children in their twenties who have moved out, so no longer experiences ‘mum guilt’, but revealed it is something she’s had in the past.

Offering advice to those who feel it now, Karren said: ‘I would say that of all the titles I have, working mother is the one that suits me best because my kids and my family and my work, are the two most important things to me.

‘I spent a lot of time going to sports days, board meeting, activity play, board meeting and when you’re at one and thinking you should be at the other, and vice versa, but I will say this, that you can only do what you can do, and it actually it all works out ok at the end.

‘I’ve got two great kids, and that’s not because occasionally I missed a sports day or occasionally a nanny took them into school, it’s because when they have a different experience with a working mother – they learn to value their own opinions, and their own money and to have a career and to have self esteem and to be ambitious and passionate and they’re very different lessons and they’re all very important ones as well.

‘My kids think they know everything. I’m very close to my kids. I speak to them every day and I see them at least five times a week.’

‘We’re all very very close, and I give them the space to go and od their own thing and make their own mistakes with them knowing that I’ll aways be a safety net for them with whatever they need me for.’

Model: Karren’s daughter Sophia has branched out into Instagram modelling