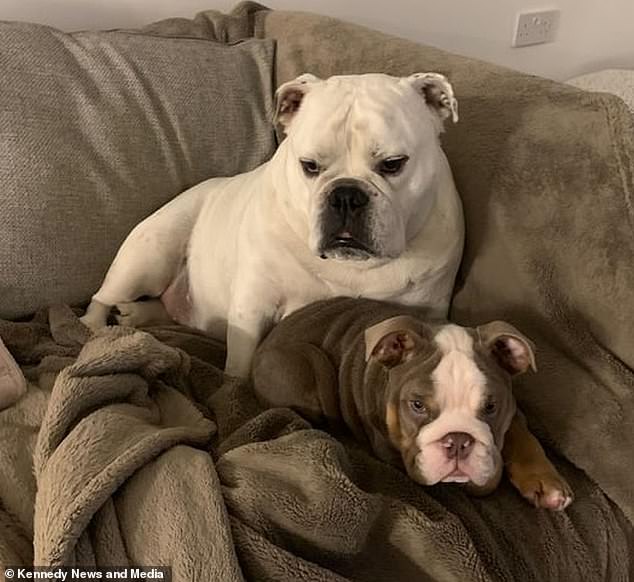 I’ll ruff you up! Moment bulldog BODY SLAMS playful puppy when he jumps off sofa and lands on his head


This is the moment a no-nonsense bulldog taught a boisterous puppy a lesson by body slamming him into the floor ‘like something out of WWE’.

Lucy Tilley-Toon, 43, filmed the moment her 10-week-old bulldog puppy Bruce launched himself from the sofa onto unsuspecting Keith’s head in a bid to encourage him to play on January 2.

With lightning-quick reflexes seven-year-old Keith throws his head backwards while letting out a yelp of surprise and inadvertently flips Bruce 180 degrees.

The 10-week-old bulldog puppy, called Bruce, was slammed to the ground by his seven-year-old companion, Keith, after jumping on his head at their home in Swadlincote, Derbyshire

Unhurt by the wrestling move, Bruce flashes the camera a look of surprise and walks away as mother-of-two Lucy can be heard in fits of laughter.

Since she shared the funny clip on Facebook with the caption ‘…what were we thinking getting another….WWE SMACKDOWN……’ it has racked up more than 900 likes, shares and comments.

Lucy, from Swadlincote, Derbyshire, said: ‘Bruce is always wanting to play and Keith is a very relaxed dog.

‘Any attempts to play didn’t work so he got onto the sofa and dived onto Keith – he’s got some flight on him.

Lucy Tilley-Toon, 43, from Swadlincote, Derbyshire, said the playful bulldog puppy Bruce joined their family on Boxing Day, and has since slowly been building inroads with Keith

‘It [Keith’s reaction] was a proper smackdown move, like something out of WWE.

‘He just wanted to pin him down and teach him some manners. Keith definitely won that bout.

‘Bruce was absolutely fine. He’s pretty robust. It’s not put him off trying to get Keith to play with him.

‘They’ve got a proper brotherly relationship – teasing each other and being daft. It was just funny.’

‘Like something out of WWE’, Keith deals 10-week-old Bruce an ill-tempered body slam in response to Bruce’s boisterous invitation to play

Another commented: ‘I can’t stop watching this!’

Lucy, a residential support officer, and brewery operative husband Adam Toon, 38, were sitting in the living room when the smackdown shenanigans began.

Lucy, who works as a residential support officer, said the age gap between Bruce (left) and Keith (right) would be an ‘ongoing’ cause of tension, but that slowly they were becoming closer

It’s not the first time Bruce, who arrived on Boxing Day, has annoyed his older ‘brother’.

Lucy said: ‘Bruce goes after Keith’s toys all the time trying to irritate him.

‘Keith wasn’t having any of it. I think it will be ongoing as there’s a big age gap but I have got a picture of them lying together, so they’re getting there.’