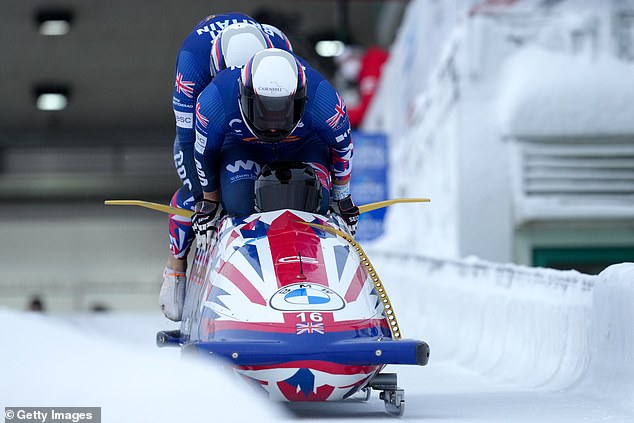 
Greg Rutherford made his international bobsleigh debut on Sunday – but remains in a tight battle to qualify for the Olympics after only finishing 17th in Winterberg, Germany.

Racing as part of Lamin Deen’s four-man crew, the London 2012 long jump gold medallist is pushing to reach the Winter Olympics in Beijing, which start next month.

Deen’s team are yet to qualify and have only one more World Cup race in St Moritz, beginning on Friday. Rutherford’s bid to compete in the Olympics in a new sport was rocked by a shoulder injury in November.

Greg Rutherford made his international bobsleigh debut in Winterberg, Germany on Sunday

Britain’s No 1 team in the four-man bobsleigh, led by Brad Hall, claimed their third second-placed finish of the season. They are currently ranked fourth in the world going into Beijing.

Rutherford is best remembered for his role in a memorable night in London almost 10 years ago, when he won gold to add to Sir Mo Farah and Dame Jessica Ennis’s triumphs in the capital.

The 35-year-old remains Britain’s record holder in both indoor and outdoor long jump, and won gold in the World Championships in 2015.