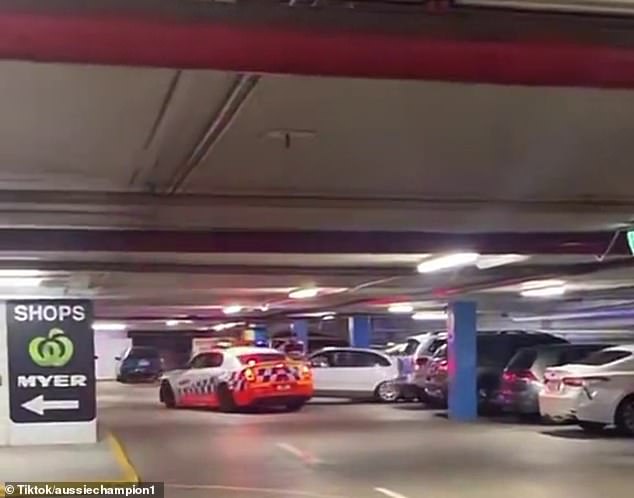 
The shocking moment a wanted man slams his car into a police vehicle in a desperate attempt to escape an underground carpark has left viewers perplexed.

The video was uploaded by a witness of the bizarre collision to TikTok on Sunday with the caption: ‘Nothing worse than being blocked in’.

The driver is seen shooting out of a space in the underground lot and brutally colliding with the police car, sending the vehicle spinning to the left.

The driver is seen shooting out of a space in the underground lot and brutally colliding with the police car, sending the vehicle spinning to the left (pictured)

The white Holden Statesman reverses into the same spot before hurtling forwards again and fleeing the carpark with a screech of its tyres.

A shocked bystander who watched the bizarre encounter unfold is seen putting a helpless arm out towards the car as it races past him.

The footage has received over 300,000 views since it was uploaded on Sunday with social media users taking to the comments to share their thoughts.

‘That’s gonna make for a fun court hearing,’ one suggested.

‘Well this person won’t be driving for a while,’ a second wrote.

A NSW Police spokesperson said police were called after the driver of the car was seen speeding down David Street in Albury, five hours southwest of Sydney.

A senior constable followed the car into an underground carpark and stopped in front of the Holden, which had three passengers inside.

‘The Holden driver repeatedly rammed the police vehicle until there was room to exit the carpark and drove from the scene,’ the spokesperson said.

‘The 30-year-old male senior constable was uninjured. The police vehicle sustained significant damage and was towed from the scene.’

Police launched an extensive search of the area and found the Holden abandoned on a street in Wodonga in Victoria, a ten-minute drive from Albury’s city centre.

The car is due to undergo forensic examination with officers from the Murray River Police District urging anyone with dashcam footage to come forward.