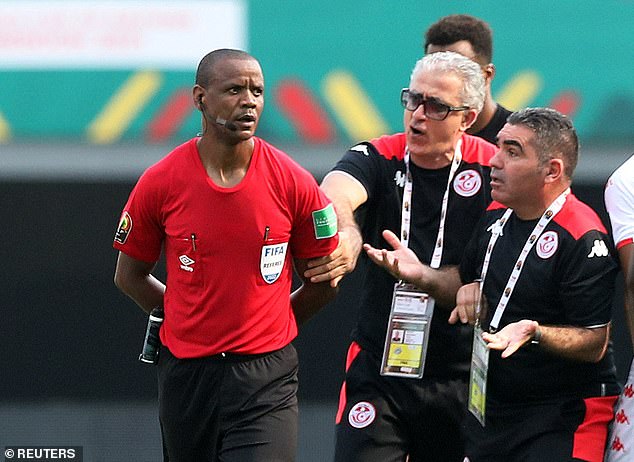 REVEALED: Janny Sikazwe, the referee at the centre of AFCON chaos with Mali and Tunisia after blowing for full-time five minutes early, was suspended amid corruption allegations in 2018

The referee at the centre of the chaos in the Africa Cup of Nations match between Mali and Tunisia was suspended for corruption allegations in 2018.

Janny Sikazwe blew for the final whistle in the 85th minute of the match between the two sides before restarting play, rejecting a VAR review of a red card and then ending the match 20 seconds early once again.

He had to be escorted off the pitch after the bringing an end to the game. Mali won the match 1-0 thanks to a penalty from Ibrahima Kone but Tunisia were livid, particularly as Mali were down to 10-men.

But four years ago, CAF suspended Sikazwe on suspicion of corruption after the way he handled an African Champions League match between Esperance and Primiero Agosto.

Esperance beat Rades 4-2, but Sikazwe awarded them a controversial penalty for their opening goal, before ruling out an Agosto goal for a perceived foul on the Esperance goalkeeper.

The ruling of the CAF disciplinary board at the time said: ‘The chairman of the Caf Disciplinary Board decides that there is good ground to hold a hearing regarding allegations of corruption made against Mr Janny Sikazwe.

‘Mr Janny Sikazwe is provisionally suspended from all football activities related to Caf pending a hearing before Caf Disciplinary Board.’

The suspension was put in place in November 2018 but lifted by FIFA in January 2019.