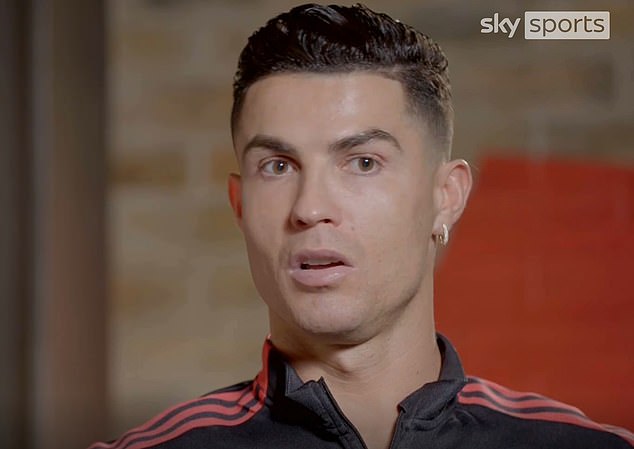 Manchester United should be fighting for the Premier League title and anything less than a third-place finish this season would be a failure, claims Cristiano Ronaldo.

The United legend was in bullish form ahead of this weekend’s trip to Aston Villa, telling Sky Sports he did not leave Juventus to become involved in a fight for fourth.

‘Manchester United should win the league or be second or third,’ he told the broadcaster.

‘I don’t see other positions for Manchester United to be honest, I don’t see. In my eyes, I don’t accept that our mentality be less than to be in the top three in the Premier League.’

Ronaldo would have been hoping to challenge for the title upon his return to Old Trafford last summer, but United already find themselves 22 points behind leaders Manchester City down in seventh at the halfway stage of the season.

Ole Gunnar Solskjaer paid the price for a dreadful run of five defeats in seven matches earlier in the campaign, with interim boss Ralf Rangnick replacing him at the helm last month.

United have since taken 13 points from a possible 18 under their new manager, and Ronaldo – who has scored 14 goals in 21 games this term – believes they now have to push on and finish near the top.

‘I don’t want to be here in a club to fight to be in sixth or seventh or fifth place, I’m here to try to win, to compete. I think we compete but we are not yet at our best level’, he said.

‘Long way to improve and I believe if we change our mind, we can achieve big things.’

Ronaldo also backed interim boss Rangnick to do a good job at the Premier League club but said the German needs time to bed in his ideas and improve the team’s performances, after the 63-year-old has faced questions from the media about players being unhappy with his methods.

‘Since he arrived… he changed many things,’ Ronaldo told Sky Sports.

‘But he needs time to put his ideas across to the players. I believe he’s going to do a good job. We know we aren’t playing the best but we have many games to improve.

‘Since he arrived I think in some points we’re better… It isn’t that easy to change the mentality of players and the way they play, the culture, the system like that.’

‘I think to build up good things, sometimes you have to destroy a few things. So why not – new year, new life and I hope United can be the level fans want. They deserve that.

‘We’re capable of changing things now. I know the way but I’m not going to mention it here because I don’t think it’s ethical on my part to say that. What I can say is we can do better – all of us… I’m here to try to win, compete.’

Countless reports have claimed the Red Devils are suffering from a toxic, divided dressing room.

But Ronaldo’s stirring call to arms have thrilled the club’s fans, who claim it shows why Rangnick should immediately hand him the captain’s armband as a replacement for Harry Maguire.

One wrote on Twitter: ‘SAY IT LOUDER FOR THOSE IN THE BACK @Cristiano the rightful captain’.

Cristiano Ronaldo should be the captain of Manchester United.
Standards trickle down from the captain, and his mentality needs to be instilled into these players.

Another said: ‘This is the elite mentality needed at #MUFC. The dressing room lacks winners and players willing to do the hard graft to become winners. Just give him the armband.’

A third commented: ‘Cristiano Ronaldo should be the captain of Manchester United. Standards trickle down from the captain, and his mentality needs to be instilled into these players.’

While one simply put: ‘Give him the armband immediately’.