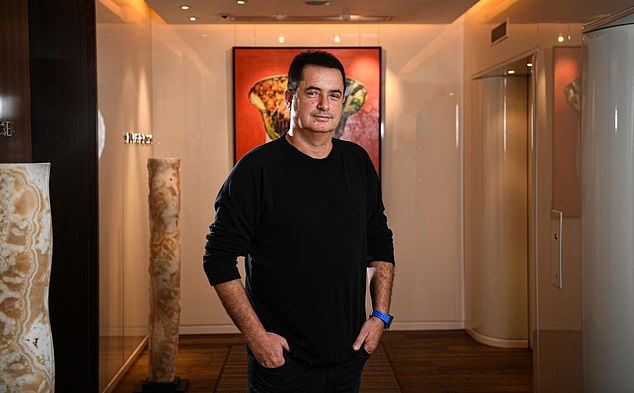 Acun Ilicali has only just settled on the white leather sofa in the 10th-floor lounge of the Four Seasons Hotel in London when he suddenly bursts into song.

‘We’re singing for England… En-ger-land!’ chants the incoming owner of Hull City. ‘Catch me if you can, ’cause I’m the England man!’

Listening to Ilicali’s rendition of World in Motion, it is immediately obvious life at Hull is not going to be dull. There is, though, a reason why he is performing John Barnes’ rap from England’s 1990 World Cup anthem – and it has nothing to do with him being the presenter of Turkey’s version of The Voice.

‘At World Cups, England are one of the two countries I support. I remember the big success of 1990, with Gascoigne and Lineker, and the song they made,’ explains the TV tycoon, who boasts 13.4million Instagram followers and has been dubbed the ‘Turkish Simon Cowell’ for being the brains behind his country’s biggest reality shows.

‘I have always been in love with English football so when I had the power and finance level, I decided to buy a club from England. I wanted to feel this English football fully in my blood. To buy a team was my dream.’

The 52-year-old is set to fulfil that dream in the coming days when he expects to complete his protracted £30million takeover of Hull, ending the unpopular reign of Assem Allam after more than 11 years. But just why has the globetrotting self-made millionaire landed his private jet in East Yorkshire?

‘I was checking which club was best for me – I looked at about five,’ admits Ilicali, sitting with Sportsmail in an understated black jumper, jeans and white trainers.

‘I knew Hull when they were in the Premier League but I just wanted to go and see where the city was and what it was like.

‘It was in June that I first came and from the minute I landed, everything made me feel so good. I loved the stadium and the people. I got such a good vibe from the city.

‘Hull has the Humber Bridge like Istanbul has the Bosphorus Bridge. That is another sign of destiny. Even the shirt colours attracted me so much. I was with my brother and I said, “This is my city and this is my team”.’

Ilicali witnessed his team first hand at the MKM Stadium last Saturday when they lost 3-2 in the FA Cup against Everton after extra time. Grant McCann’s side, who won League One last season, are currently 19th in the Championship, four points above the relegation zone, but their owner-in-waiting is only looking up not down.

‘In my whole career, I have never been unsuccessful,’ says Ilicali. ‘Every year was better than the previous one.

‘I wouldn’t say that it will happen in one year, but our full concentration will be the Premier League starting from next year. That is the first target but, trust me, if we can go to the Premier League, we will not be one of the favourites to be relegated. Our aim will be to push the top six teams.

‘I would say there is nothing Hull doesn’t have that Leicester have. I really appreciate Leicester’s performance in the last years and I can say that we are the candidate to be the next Leicester. This team has the potential to win trophies.’

Such ambition will be music to the ears of City supporters, who have stayed away from the MKM Stadium in their droves because of anger at the way the club was run by the Allam family, not least how they tried to change the name from Hull City to Hull Tigers.

‘I am not here to make money,’ insists Ilicali. ‘None of my plans depend on how much I make. If I do something, it will be for the good of Hull City.

‘We need to make some transfers. I already have good connections now. We want to make, not the most expensive, but the correct transfers and go to the Premier League.

‘If Hull City fans want to go to the Premier League as we do, all of us have to work together. Fans are the most important part of this team.

‘I am dreaming of making a revolution in football history by taking the fans inside the game. I want to get the fans involved in the club like no club has done before in world football.’

Ilicali wants to keep those plans secret for now but he is open about his ambitions to grow the club’s fanbase in his native Turkey.

He demonstrated what was possible on New Year’s Eve when he announced live on The Voice that his takeover was pending – and Hull’s Instagram account added more than 100,000 new followers.

‘This is just the beginning,’ he says. ‘We will have more than one million supporters following Hull City’s account and I think we will have 10m Turkish fans just supporting Hull City as their No 1 club in England.

‘I am dreaming such crazy things like taking Hull people to Turkey on their vacations, let them enjoy the beauty of my country, and let Turkish people enjoy the football in England with this beautiful city.

‘I think it is going to be an historical time with Hull City and Turkey to have the best relations. Maybe we will tell our grandchildren something that has happened that the world has never lived before.’

‘My life is one in a million,’ says Ilicali – and nobody would argue otherwise after reading what comes next.

‘I married when I was 20. I was a father when I was 21. I lost my parents in a traffic accident when I was 22. My daughter was inside the car. She survived with 15 broken bones.

‘When I was 23, I had a motorcycle accident and my friend passed away near me. When I was 24, I was bankrupt and didn’t have a job. I had lived every negative in life.’

It is what makes Ilicali’s rise to become one the most rich and famous men in Turkey all the more remarkable. Jobless and penniless at 24, he first found employment as a football reporter for a TV channel, where he earned only £12.50 a week.

‘I was just passing the front of the TV station and went in to have a conversation with the sports guy,’ he recalls.

‘He wondered if I wanted to be trialled as a reporter. It meant instead of paying money to see football, I got to go for free, so I loved the offer and accepted it.’

Ilicali worked his way up and he went on to present a prime-time travel show which made him a household name.

He then founded his own production company, Acun Medya, buying the Turkish rights for popular shows including Deal or No Deal, Got Talent, The Voice and Dancing with the Stars, all of which he has either been a judge on or hosted, earning the Cowell comparisons.

Ilicali also owns his own Turkish TV channel and now produces programmes in other countries. Unsurprisingly, he hopes to make a series about his ownership of Hull.

‘From the screen side, you can call me the Turkish Simon Cowell,’ says Ilicali when asked about his nickname. ‘But I am one of a kind. I have never seen a TV personality owning a TV channel, also a global production company, also a football club. I can say that I am a different kind.’

It is not just his TV work which makes Ilicali, who will spend his next months filming reality show Survivor in the Dominican Republic, headline news back home.

‘My personal life could be a soap opera for two seasons or three seasons,’ he jokes. ‘I have had three marriages and have four daughters. Because of my personal life being a little interesting, I am the person who has made the most news in Turkey 10 years in a row.

‘But I am very proud to say I am always in the top five most-trusted Turkish personalities in polls. I am very proud to be loved by Turkish people. They show their love to me like crazy every time I go on the streets. If I go to a stadium, I take on average 200 photos.’

Such love towards Ilicali already appears to have stretched from Istanbul to Hull, judging by the hero’s welcome he received from fans at the Everton tie. Imagine, then, his popularity if he returns the Tigers to the top flight.

‘I was expecting a good welcome from the city but this was more than I expected,’ he adds. ‘This motivates me 10 times more.

‘It was my dream to buy a club and now it is my dream to have big success with that club. I am fully focused on how we can make history in British football.’