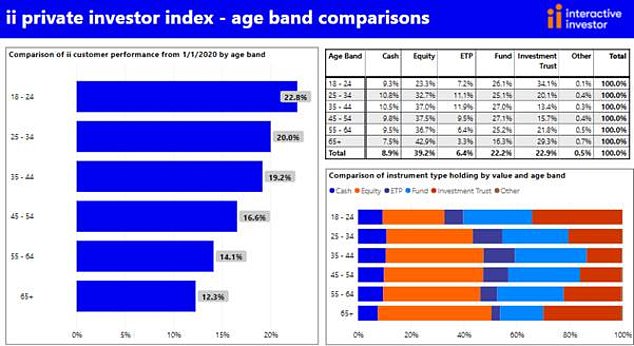 Young investors have outperformed their older counterparts and professional investors since the start of the pandemic, according to a new study.

Investors aged between 18 and 24 outperformed all other age groups, enjoying a 22.8 per cent return since the start of the pandemic.

Those in the 24-34 and 35-44 year old age brackets were not far behind the youngest investors, returning 20 per cent and 19.2 per cent respectively in the two-year period.

The data from investment platform Interactive Investor drilled into its customers’ performance by age group and compared them to the average fund.

All three age groups beat the average customer portfolio return of 14.5 per cent over the same period and the FTSE All Share index which gained 6.7 per cent.

Older investors, aged over 65, by comparison returned 12.3 per cent over the two years and were more likely to opt for individual stocks like Glaxosmithkline and Astrazeneca.

Despite the meme stock phenomenon which sparked a new generation of investors, the research shows young investors did less share picking and focused on backing investment companies.

Interactive Investor has attributed younger investors’ success with this higher-than-average exposure to trusts – at 34 per cent on average for the age group versus an overall average of 23 per cent.

However, it may also reflect the trusts that they held, with popular names such as Scottish Mortgage scoring big returns through the pandemic.

But while younger investors have performed well over two years, their outperformance stalled in 2021 and slipped slightly behind older investors.

Young investors have turned their back on individual stocks, instead opting for investment trusts which performed well last year

The investment trust sector has proved to be a popular asset class for investors: data from the Association of Investment Companies shows the industry raised £14.8billion of new money last year.

The closed-ended structure has previously been overlooked by some everyday investors but it gives managers the opportunity to invest in illiquid assets like infrastructure and renewables which have proved popular in recent years.

Another benefit investors have found is that income is less lumpy than equities.

Eleven trusts featured on the AIC’s ‘Dividend Heroes’ list for increasing their dividends for more than 40 consecutive years, including City of London Investment Trust and Alliance Trust.

This is likely due to the higher exposure to equities among this age bracket: stocks made up 42.9 per cent of the portfolios of 65+ investors compared to 23.3 per cent among 18 to 24 year olds.

Interestingly, II said its average investor was not able to beat the FTSE All Share and FTSE 100 last year – which returned 18.3 per cent and 18.4 per cent respectively.

However, they still beat the professionals at their own game when compared to a multi-asset portfolio rather than one just invested in shares. The IA Mixed Investment 40-85 per cent Shares sector which was up just 11 per cent across the year.

Scottish Mortgage, Britain’s largest investment trust, was the most popular holding across all age groups.

However, the trust, which took early bets on Tesla and Amazon, has underperformed over the past six months and a further tech sell-off has seen its share price fall more than eight per cent since the start of the year.

While Tesla has remained a popular stock for Interactive Investor customers across all age brackets, they say individual stocks do not dominate the portfolios of 18-24 year olds.

However, this differs from data from fee-free share dealing app Freetrade, which has 1.2million UK customers, of which 27 per cent are between 18 and 25. Its investors can buy individual shares, investment trusts and ETFs.

Leading tech stocks like Apple and Amazon make up 50 per cent of the portfolios of all investors across all age groups, although younger investors seem to have adopted a ‘satellite and core approach’, with S&P tracker funds particularly popular.

Freetrade investors between 36 and 45 are the least risk averse with 60 per cent of the top buys being tech stocks, suggesting they are looking to maximise growth before shifting towards income as they approach retirement.

There were also some subtle variations between men and women’s performance, according to Interactive Investor.  Women performed slightly better than men in the past year – 13.9 per cent versus 13.7 per cent.

Since the start of the pandemic, women saw returns of 14.3 per cent just ahead of the 14.2 per cent earned by men, which the platform said could be because they had a higher exposure to investment trusts but differences in portfolios are minimal.

‘It’s encouraging to see that our customers have managed to navigate the ongoing market uncertainty since the start of the pandemic in 2020,’ said Interactive Investor boss Richard Wilson.

‘Over the 24 months of data collected, our customers have outperformed both the FTSE 100 and FTSE All Share, and our younger investors have demonstrated a particularly impressive performance, helping to pave the way for their longer-term financial security.’