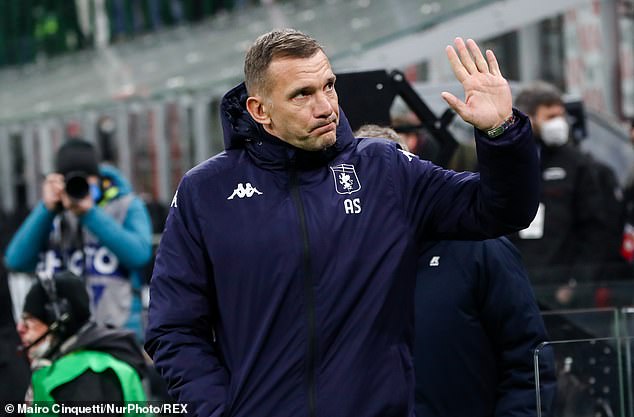 By Faaez Samadi For Mailonline

Genoa have fired Andriy Shevchenko as their manager after just nine Serie A games in charge, the club confirmed on Saturday.

The writing had looked on the wall for a while for the ex-Chelsea and AC Milan striker, with the club having won none of its league matches since Shevchenko took over.

‘Genoa CFC announce that coach Andriy Shevchenko has been relieved of his post,’ the club wrote in a statement.

‘The club thanks the coach and his staff for the hard work they have done in recent months.’

Shevchenko, who was previously Ukraine manager, has overseen nine league defeats, with his only victory in 11 games a 1-0 win over Salernitana in the Italy Cup.

Unfortunately a league win over Salernitana would have been much more significant for Shevchenko, as they lie one position beneath 19th-place Genoa in Serie A.

A big strike against Shevchenko is that Genoa are now in a worse place than when he arrived in November, when they were 17th and above the relegation zone. They are currently five points adrift of safety.

Shevchenko had won just one of 11 games since arriving in November, and none in Serie A

While Genoa have faced top class opposition under Shevchenko’s tenure – including Milan, Juventus, Atalanta and Roma – things turned against him when his side capitulated to a 3-1 defeat in the hotly-contested derby against Sampdoria, who are also struggling in 15th.

The reins at Genoa will be temporarily handed over to club youth coach Abdoulay Konko, who will be assisted by under-17 coach Roberto Murgita.