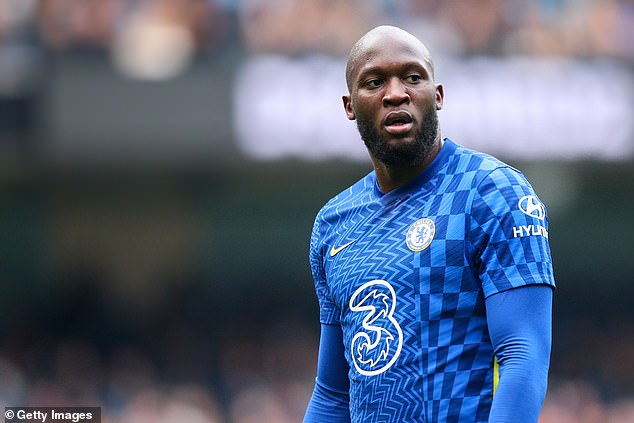 ‘Get him off the pitch FFS!’: Chelsea fans fume at Romelu Lukaku after their £98m Belgian striker wasted a glorious chance to give them the lead at Manchester City by choosing to pass when the goal was gaping


Chelsea fans were not happy with Romelu Lukaku after the Belgian squandered a glorious opportunity to put the Blues ahead against Manchester City by attempting to set up Hakim Ziyech.

With just over nine minutes gone in the first half at the Etihad, Lukaku found himself in space after spinning away from John Stones and galloping towards City’s goal.

However, rather than entering the box at pace and looking to test Ederson, Lukaku attempted to play Ziyech in with a through ball to his right.

The Belgian overhit the pass out of the former Ajax winger’s reach, and the flag was up for offside anyway.

Ziyech’s position, however, would have likely been irrelevant had Lukaku opted to go for goal himself.

As City breathed a sigh of relief, it didn’t take long for some Chelsea fans on social media to make their feelings clear about Lukaku’s decision-making, while rival supporters poked fun at the Belgian.

The former Everton and Manchester United endured a difficult first half against City and he was often left isolated up-front on his own.

Lukaku had the fewest touches of any Chelsea player in the first 45 minutes and the Blues failed to register a single shot in the first half.

According to OptaJoe, that was the first time they have failed to do so in a Premier League game under Thomas Tuchel, and the first time overall since they played Newcastle in May 2018.

Lukaku’s afternoon didn’t particularly improve in the second half, as he was denied by Ederson when 1 v 1 with City’s goalkeeper.

The 28-year-old became the most expensive signing in Chelsea’s history when he returned to Stamford Bridge from Inter Milan for £97.5 million in the summer, after winning the Serie A title last season.

His second spell with the Blues got off to a brilliant start with three goals in four Premier League appearances, before the Belgium international was ruled out for a month with an ankle injury he sustained in the Champions League against Malmo.

Lukaku returned to action at the end of November, before missing games against Everton and Wolves because of coronavirus in the lead-up to Christmas. He was back in the team and back on the scoresheet as Chelsea won 3-1 at Villa Park on Boxing Day, before scoring again three days later against Brighton.

Earlier this month, however, Lukaku caused a stir when he revealed to Sky in Italy that he was disgruntled with his role at Chelsea and was unhappy at being left out of the team by Tuchel.

He was subsequently dropped for the game against Liverpool, but eventually apologised and was on target as the Blues beat Chesterfield 5-1 in the third round of the FA Cup last week.