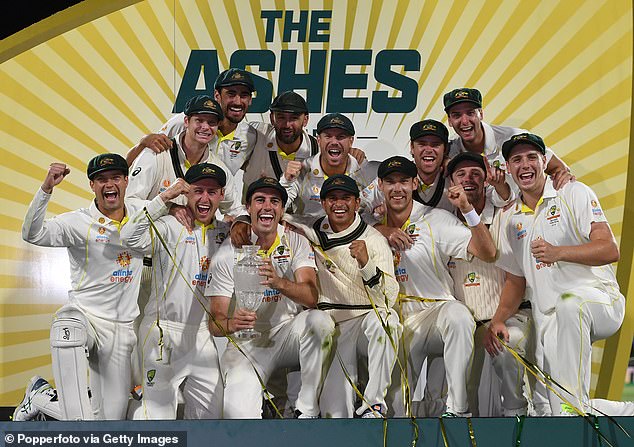 By Toby Miles For Mailonline


Pat Cummins wanted every contributor to Australia’s demolition of England in shot for their celebrations, ditching the champagne so Usman Khawaja could join in.

The hosts tore through Joe Root’s batsmen for another commanding victory on Sunday, sealing the Ashes with a 4-0 victory after the fifth and final Test.

Cummins and Co had already popped their bottles and enjoyed frothy hosing with the urn, when the skipper spotted Khawaja standing aside.

This might be a small gesture but this is what makes Pat Cummins great. He realised Khawaja had to dip because of the booze and rectifies it. pic.twitter.com/GNVsPGJhfK

The top-order batsman is a Pakistani-born Aussie and of muslim faith – a religion strictly against the consumption of and association with alcohol.

Keen to celebrate as a team, Cummins made the call to hide the bubbly and began waving for Khawaja to join in alongside Steve Smith at the front.

With stretched smiles all-round, Cummins waited for Khawaja before Australia let out a collective roar for the cameras.

The gesture was widely praised on social media, with the Australia captain’s gesture a sign of progress in the game rocked by scandals last year.

@irfan_m1 wrote on Twitter: ‘Well Done Pat Cummins, well played. Including Khawaja in the celebrations after he had to run out because of the booze.

‘A small but powerful gesture.’

@babai1994_ added: ‘Cummins is a gem of a guy. Every player would love to have a leader who looks after those little perks.’

England have made a similar effort for the likes of Moeen Ali in the past, with Root delaying the spraying so the muslim star could get involved.