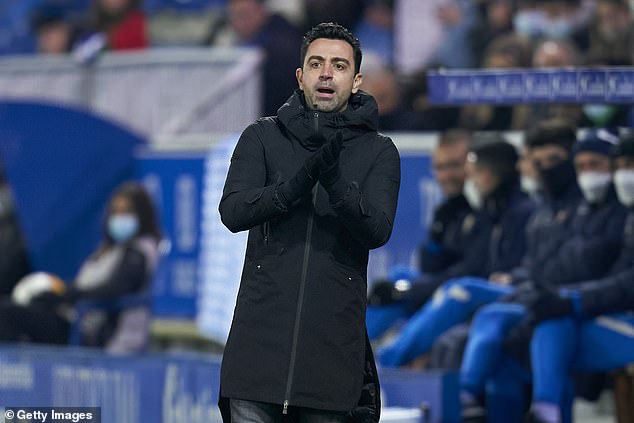 Barcelona must choose to SACRIFICE one signing and not play them in Europe… and Pierre-Emerick Aubameyang ‘is set to be DUMPED’ ahead of January buys Dani Alves, Ferran Torres and Adama Traore


Barcelona manager Xavi will be forced to exclude one of his four January signings from their Europa League squad.

This is because European competitions only allow a maximum of three new players signed during the January transfer market to feature.

As a result, Xavi will have to choose between Dani Alves, Ferran Torres, Adama Traore and Pierre-Emerick Aubameyang, who all joined the club last month.

Whichever player Xavi chooses will be unable to represent Barcelona on the European stage for the remainder of the season.

According to Marca, Xavi will be most likely to sacrifice former Arsenal outcast Aubameyang for the European campaign.

Dani Alves will most likely feature in Xavi’s side considering Sergino Dest or Oscar Mingueza have failed to prove their worth to the manager on the right wing.

Alves has also spent a considerable amount of time with the Barcelona squad, having returned to the Nou Camp in November, five years after his first stint with the Catalan giants came to an end. However, he did not sign for the club until the LaLiga registration window opened on January 3.

Therefore it is down to Traore and Aubameyang to battle it out for the last remaining space in the European squad at Barcelona.

Therefore it is down to Adama Traore (pictured) and Aubameyang to battle it out for the last remaining space in the European squad at Barcelona. However, Traore holds the upper hand

Traore holds the upper hand as Ez Abde and Ferran Jutgla will be unable to play in Europe because they were not registered on the B list at the start of the preseason.

Additionally, Traore is only on loan with the Catalans until June 30 – with a £30m option to buy – whereas Aubameyang has signed an 18-month contract.

Therefore, Xavi may be eager to allow the Wolves winger to earn a permanent place in his side before the 2021-2022 campaign comes to an end.