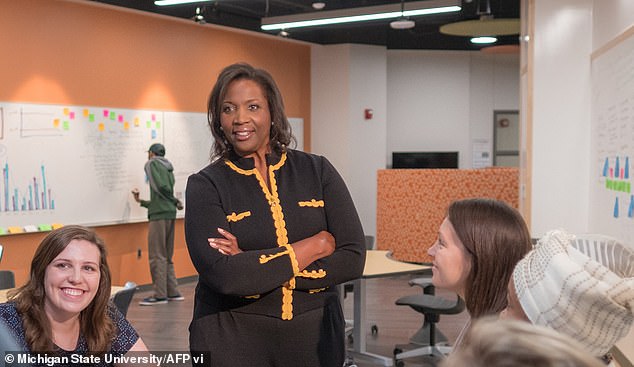 One of President Biden picks for the Federal Reserve Board has called for black Americans to receive reparations for decades of slavery and economic discrimination.

Details emerged in the week when Republican are expected to grill Lisa Cook, an economics professor at Michigan State University, about whether her public views would prevent her being a nonpartisan Fed official.

Biden announced Cook’s nomination on Jan. 14 and, if confirmed, she would be the first black woman on the seven-person board.

But Republicans are signaling a tough confirmation, starting with her views on reparations.

‘Everybody benefited from slavery. Everybody,’​ ​Cook​ ​said in a September 2020 EconTalk podcast​​, in which she described her research into inequality.

That includes universities that bought and sold slaves, she continued, to insurance companies that underwrote ships: Everybody benefited apart from slaves themselves.

Republicans are gunning for Lisa Cook, nominated by President Joe Biden for one of the open positions on the Federal Reserve Board, over her comments on reparations and other political issues. She is pictured here in her role as economics professor at Michigan State University

Biden nominated her for the post of governor on Jan. 14 and her hearing is on Thursday Feb. 3

Biden’s other picks for the Fed are Sarah Bloom Raskin, a Duke professor, as vice-chair for supervision, and Philip Jefferson, a professor at Davidson College whose research focuses on poverty, for the other open governor slot

‘So, I think that we absolutely need some sort of reckoning with that,’ she said. ‘

‘There are many proposals on the table to study the possibility of reparations, many economic proposals being put forward, and I think they should all be taken seriously.’

That puts her in line with Biden. To placate growing demands from the left of his party during the 2020 campaign he said he backed a study of the impact of paying reparations, and he supported a House bill  – H.R. 40 – to set up a panel to do that.

Cook has offered her own support to H.R. 40, for instance while taking part in a forum hosted by the  University of California Berkeley Haas School of Business.

‘I think that’s absolutely what needs to be done,’ she said.

Her experience includes research on the intersection of race and economics, which her supporters say should be a vital part of managing the economy.

Republican members of the Senate banking committee signaled that they will give Cook a hard time. They said her past comments and partisan political fights suggested she was not the right person for the Fed’s apolitical regulatory role

A senior GOP Senate aide told the Washington Examiner that Cook’s past statements were ‘inappropriate’ for someone being considered for the Fed, with its independent regulatory functions.

Republicans on the Senate banking committee took to Twitter on Monday to ask whether the Fed could afford a ‘hyperpartisan’ like Cook.

‘Regardless of the merits, those are issues to be decided by elected officials who are accountable to voters.’

They listed some of her previous Twitter comments, from suggesting there were limits on free speech to retweeting a warning that voter suppression was happening during the 2020 election and another retweet in support of racial justice protests.

And they concluded the thread by asking whether Cook would respect the Fed’s independence.

‘Historically, the Senate has only confirmed Fed nominees who have had the good sense not to engage in political warfare with their prior statements,’ they said.

To her supporters, the criticism is another of the racist smears faced by black women nominated for senior positions.

‘One of the things we know is that black unemployment stays persistently at about double the level of white unemployment,’ she told HuffPost.

‘So just asking a question generally about unemployment doesn’t get to a fundamental problem about not just total how many people are unemployed, but how that pain is distributed throughout the economy and how different economic policies might change.

‘That’s what Lisa Cook focuses on. And that frankly makes some people uncomfortable.’

Cook will appear before the Senate banking committee on Thursday, alongside Biden’s two other nominees: Sarah Bloom Raskin, a professor at Duke, and Philip Jefferson, a professor at Davidson College whose research focuses on poverty.