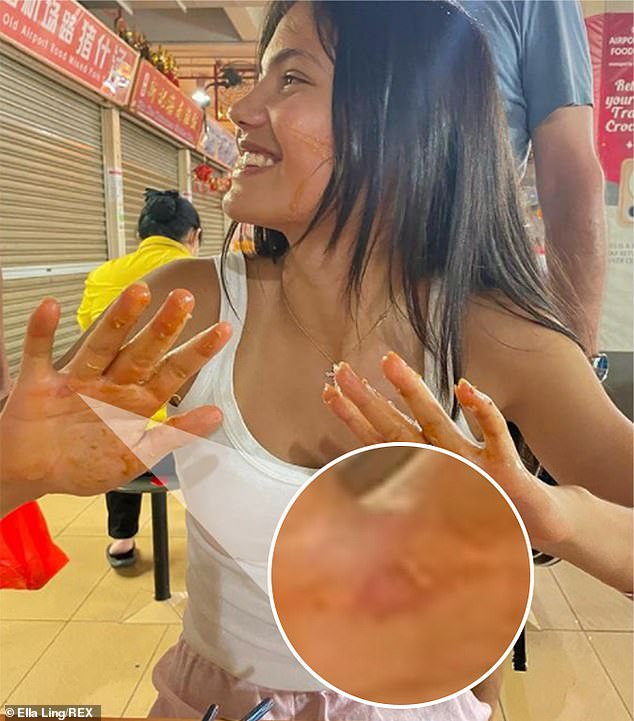 Emma Raducanu shows off the nasty blister on her hand that led to shock second-round Australian Open exit, which is still visible TWO WEEKS after she was dumped out in Melbourne


British tennis star Emma Raducanu has shown off the hand blister that blighted her progress at the Australian Open last month, revealing the problem is still visible two weeks after she was knocked out in the second round.

The teenager, who made history by winning the US Open in September, was dumped out of the tournament by world no 98 Danka Kovinic after her performance was hampered by the blister early on in the match.

She lost in three sets in Melbourne and admitted the blister had caused her a lot of pain after receiving treatment on her hand in between games, saying the problem was likely caused by a lack of tennis before she travelled to Australia.

Now the 19-year-old has revealed the nasty-looking blister to her followers on Instagram, which still looks sore two weeks on from her tournament exit.

Raducanu has been taking some time off from tennis to visit Singapore and uploaded a photo of her hands after enjoying a meal at a restaurant.

She wrote: ‘Singapore!! We worked, got stuck in (literally..), enjoyed the great culture, improved and had so much fun here. Thank you to everyone’s warm welcome, you made it even more special. I’ll be back!!’

Raducanu’s defeat at the Australian Open continued her difficult spell since her fairytale triumph at the US Open last year.

She went out in the first round of the Indian Wells tournament in October to world No 100 Aliaksandra Sasnovich – her first competition since the US Open – and lost to Marta Kostyuk in the quarter-finals of the Transylvanian Open the same month.

And she also suffered defeat in the the Linz Open round of 16 in November before a first round loss to Elena Rybakina in the Sydney Classic just before heading to the Australian Open.

Raducanu had brought hope of recapturing her US Open form when she won her first match at the Melbourne Grand Slam – beating Sloane Stephens in three sets, before slumping to defeat against Kovinic.

She revealed the true extent of her blister agony, admitting after the match it had affected her grip and caused the problem to worsen with every heavy hit.

‘It’s just the position of it,’ she said. ‘It’s right in the crease of the palm, it’s so deep. I just can’t grip the racket. Like every time I hit, every time I make contact with the ball, it creates an impact. If I hit one slightly off centre and the racket moves a bit in my hand, it’s even more friction and it rips again. So it’s very painful, every single shot I hit’

Raducanu said the blister could have been caused by a lack of activity after going 21 days without playing prior to her arrival in Australia – saying it was a tough pill to swallow exiting the tournament in that manner.

‘I have been struggling with blisters since I started playing in Australia because 21 days with no tennis, my hands got pretty soft,’ she added.

‘From day one, I was getting blisters. This particular one has been with me for about five days, and I have been trying to tape it for every practice. It would harden and dry out, but then once I played again, another layer would just rip off. It’s just in a very awkward position that’s difficult to tape.

‘We have tried so many different alternatives, and they all end up falling off or leaving me with no feel of my racket. I fought so hard just to come out and play here, I didn’t want to go out like that.’