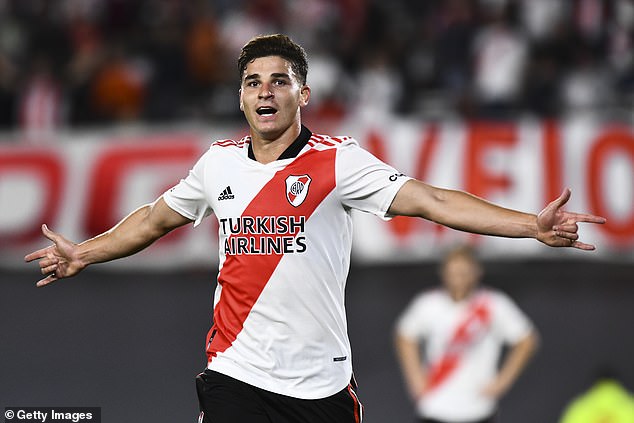 REVEALED: January transfer spending hit £760M worldwide, with English teams spending three times more than every club outside of Europe combined, and Brazil supplying the most players to the international market

By Charlie Walker For Mailonline


Transfer dealings are returning to pre-pandemic levels with £760M spent and 3,534 deals completed worldwide in January, according to FIFA.

A new report details international transfers in the latest window, and it confirms the extraordinary dominance of the European game and English clubs, in particular, in the global market.

English teams spent £258M – three-and-a-half times more – on players than every other club outside of Europe combined, which had a total expenditure of £74M.

English clubs topped the table for January transfers, including Julian Alvarez who joined Manchester City from Argentinian club, River Plate, for £21M during the window

The report also reveals that Brazil supplied more players (176) to the international transfer market than any other country.

‘Against the continuing backdrop of the pandemic, the number of international transfers of professional players rose by 28% in men’s football (compared to 2021), with 3,534 players on the move globally,’ noted FIFA’s International Transfer Snapshot 2022 report.

In 2021, when the financial impact of the pandemic hit hard, only 2,761 international transfers were recorded.

In monetary terms, the value of January transfers increased 75 per cent from £440M last year.

When looked at on a global scale, the majority of transfers involved players who were out of contract moving across borders (60 per cent), or loan moves (27 per cent). Only 13 per cent of transfers were permanent deals.

The world’s biggest spenders were officially English clubs, which laid out £258M, followed by Italian sides on £84M and then Spanish teams on £82M. Total European spending was £685M.

This compared with the total transfer spending outside of Europe, with in the North American, South American, Asian, African, and Australasian football confederations spending just £74M between them.

The money spent by English clubs resulted in 153 players being registered in the country in January. Brazil registered 201, Portugal 194 and Spain 175.

The total expenditure worldwide was £360,000, but the vast majority of transfers did not involve a fee, since 81 per cent of the players who moved were out of contract and only nine per cent of the deals were permanent.

The majority of international transfers of female professional players in January involved a European club (190 incoming and 130 outgoing transfers). The second-busiest region, in terms of transfer activity, was Africa with CAF clubs completing 43 incoming and 50 outgoing deals.