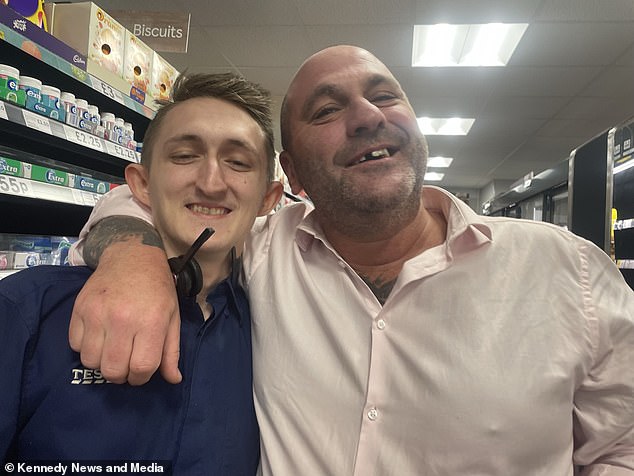 A Tesco store worker has been praised for providing the ‘the best customer service ever’ after he challenged a tipsy customer to a late-night dance-off – and even attempted The Worm across the shop floor.

Lisa Negus and Steve Williams stopped for snacks at Tesco Express in Lyndhurst, Hampshire, and couldn’t help boogying along to the tannoy music.

However, they were stunned when store worker Dean, who is believed to be the manager, spotted them and bust some moves himself.

Dean challenged Mr Williams, right, to a dance-off after he spotted the customer enjoying the in-store music while picking up some late night snacks

The pair, pictured, performed a synchronised ‘worm’ during the hilarious video

The fun-loving worker then challenged 51-year-old Steve to a shop floor dance-off – with hilarious results.

Footage from January 29 shows the pair dance towards each other down the confectionary aisle then go face-to-face as they shimmy from side to side.

Ms Negus, 48, warns another staff member to ‘watch out, it’s a competition’ before her partner drops to his knees and impressively pulls out his ‘party trick’, the worm, to his grinning opponent’s dismay.

Dean concedes defeat but is encouraged to try the famous move himself, so he and Mr Williams attempt it together until both collapse to the floor in fits of laughter.

Ms Negus said she’s glad she caught her fiancé’s 10.30pm competition on camera, otherwise ‘nobody would believe her’, and she’s hailed their experience ‘the best customer service ever’.

The engaged couple, who have children from other relationships, believe Dean deserves a promotion, and since Ms Negus shared the video on Facebook users have been left in hysterics.

Mr Williams, right, was enjoying a night out to celebrate the second anniversary of his relationship with Lisa Negus, 48, left, who filmed the encounter and shared it on social media

Ms Negus and Mr Williams had spent the evening in a Working Men’s club in Lyndhurst, Hampshire

The couple were shopping at the Tesco express store in Lyndhurst, Hampshire, on January 29

Mr Williams, who lives with Ms Negus  in Liss, Hampshire, said: ‘I was drunk and having a little bit of a dance and he just came over and started doing it as well, so we had a dance-off.

‘He was such a good sport and a good laugh, and the fact he kept trying the worm was great.

‘It’s my party trick, so I do that here, there and everywhere.

‘I’m glad Lisa caught it on camera and we kept watching it afterwards. For him to be a manager and still do it, it was great.

‘It was good to see him enjoying himself and not care what people think.’

The couple, who were enjoying a one-night getaway to mark two years together, were disappointed with their celebratory meal so headed to the Tesco Express to grab food to take back to their hotel.

They’d had a boozy night in a working man’s club so they admit the alcohol had ‘boosted their confidence’ by the time they’d reached the store.

Mother-of-two Lisa said: ‘I’m lucky I caught it on video, because nobody would believe us.

‘We asked Dean what the boss was going to say, and he just said “I am the boss”. He was only a young lad so good on him.

‘I was very shocked at first but I thought I’d encourage him. Having a few drinks we had a bit more confidence.

Mother-of-two Lisa said: ‘I’m lucky I caught it on video, because nobody would believe us. We asked Dean what the boss was going to say, and he just said “I am the boss”. He was only a young lad so good on him’

Ms Negus said: ‘I thought he was quite good to be honest, but him trying to do the worm was so amusing. He was easily persuaded. I bet he was shocked Steve could do it’

‘I thought he was quite good to be honest, but him trying to do the worm was so amusing. He was easily persuaded. I bet he was shocked Steve could do it.

‘He had some good moves. It was a breath of fresh air compared to what normal staff are like, it was the best customer service ever. He needs a promotion.

‘In the morning it was the first thing we thought of, we watched it straight away.

‘I think he enjoyed us being in there, or maybe he was finishing soon and passing the last few minutes.

Hat maker Lisa’s post sharing the video has racked up almost 200 reactions on Facebook and more than 90 comments loving the spontaneous dance-off.

Lisa’s post said: ‘When the food in the restaurant is not what you expect, and not good as your man’s, so you walk in town, keep the local working mans club open with darts competitions, pool and shots, then have a dance off with the local Tesco boss!!!

‘Who needs that posh sh**e!! I love this man and we have the best time together!!!

‘Check out the little skinny man thinking he’s having a belly off with Steve!!! It’s been quality!!’

Kerry Tinning added: ‘You two are the zest of life!’