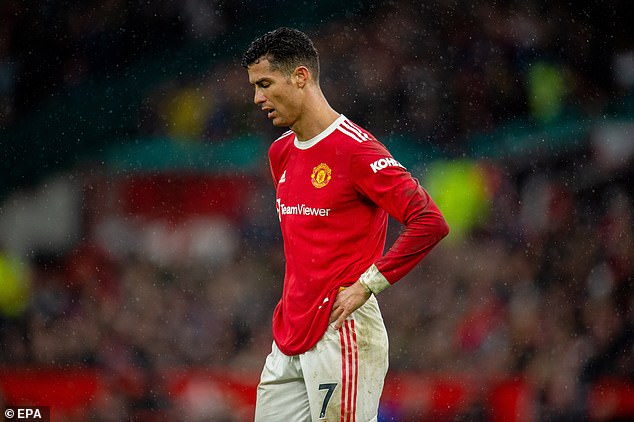 
Manchester United’s draw against Southampton on Saturday featured a bizarre incident in which Cristiano Ronaldo appeared to spit in the direction of team-mate Anthony Elanga.

Footage from BT Sport shows the five-time Ballon d’Or winner spit while standing behind the teenage forward, with some of the saliva seemingly landing on the latter’s shirt.

Elanga seemed completely oblivious to what had happened, but the footage went viral on social media, leaving viewers perplexed as to what they had just witnessed.

‘I’m sure the FA have seen Ronaldo spit on Elanga,’ one user wrote.

‘And I’m expecting a deserved punishment. that’s really unnecessary deliberate or not.’

Another added: ‘This needs explaining, Did Ronaldo really just spit on Anthony Elanga. Did United play that bad?’

Other viewers, meanwhile, appeared to be more confused.

‘Did I see things or did anyone else [see] Ronaldo spit towards the back of Elanga at the end of the game?,’ one user said.

‘Did Ronaldo just spit on his own teammate?,’ another wrote.

However, Elanga’s lack of reaction appeared to suggest the incident was nothing more than an optical illusion generated by the camera angle, as some Twitter users pointed out.

‘I hope it’s just the camera angle and Ronaldo didn’t just spit on Elanga,’ one user said, while another added: ‘Look clearly, Ronaldo is farther than Elanga, he didn’t spit on him.’

Ronaldo failed to score for the sixth consecutive game – his worst goal drought in club football in 12 years – as United were held to a 1-1 draw by Southampton at Old Trafford.

Jadon Sancho scored his second goal in three appearances in all competitions to put Ralf Rangnick’s men in front after 25 minutes, only for Che Adams to draw the visitors level two minutes after the restart.

The draw left United fifth on the table level on points with West Ham United and seven points behind third-placed Chelsea.