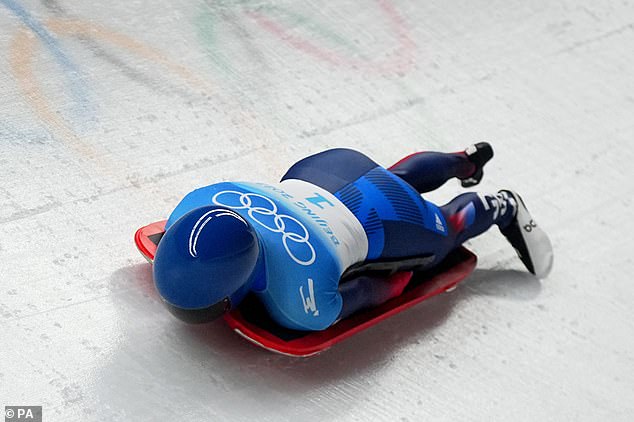 ‘An awful lot of thinking to do’: Team GB’s skeleton team set to return WITHOUT a medal for the first time since 1998 as athletes claim their ‘speed is being haemorraged by the kit’ they’ve been provided with


It comes to something when even the skeleton crew offer no way out for Team GB. For 20 years this discipline has been a consistent source of Olympic medals, but that streak ended on Saturday as the wider losing run extended.

Beijing 2022 really isn’t working out so well for Britain, who have zero medals through eight days and a diminishing list of prospects going to the second week.

Of all those to fall short, perhaps the most baffling so far is the skeleton set-up, which was funded with more than £6million of lottery money and returned nothing for the first time since 1998, with a tearful Laura Deas finishing 19th and her team-mate Brogan Crowley not qualifying for the final run.

With equipment that has been slammed by those in and around the team, including Matt Weston, who was 15th in the men’s on Friday, an inquest would seem to be brewing.

Deas’ own father Ewan said: ‘British Skeleton have an awful lot of thinking to do, the sled builders in particular. The athletes are doing their best, they are starting well, they are sliding well, the speed is being haemorrhaged by the kit.’

His daughter, who took bronze four years ago, was visibly emotional as she assessed the situation.

‘The fact it’s nowhere near what I wanted shouldn’t take away from the fact I put down some pretty good runs,’ she said. ‘Clearly we’re lacking speed and that is something we will have to go away and look at carefully. It’s something we will go away and review pretty closely and hopefully come back stronger.’

Earlier, Lilah Fear and Lewis Gibson finished the first part of the ice dance in 10th, ahead of Monday’s free dance.

Charlotte Bankes, who was distraught on Tuesday after failing as gold medal favourite to reach the snowboard cross semi-finals, was sixth in the mixed team race with Huw Nightingale.

Eve Muirhead’s curlers made it two wins from four with a strong 10-5 victory over the US and Cornelius Kersten was 25th place finish in the men’s 500m short track speed skating.

Muirhead said: ‘We’ve got some momentum now, we need to remember the good things we did because we dwell too much on mistakes sometimes.’

Team GB’s hopes of a medal could now rest with the curling team, which is led by Eve Muirhead