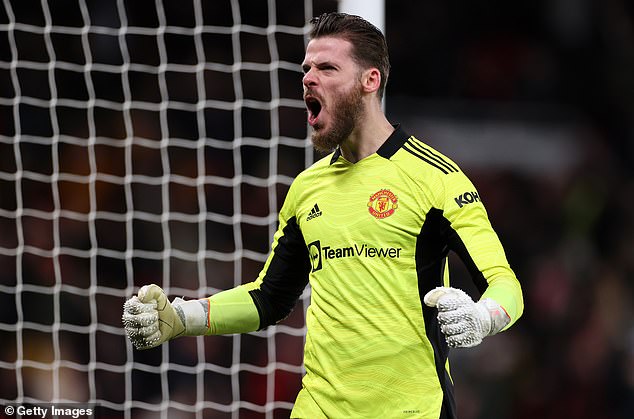 
Manchester United are reportedly set to give David de Gea a new deal just six months after his Old Trafford career looked over.

The Spain international has been a standout performer for the Red Devils who are enduring yet another dismal campaign.

De Gea recently picked up January’s Premier League Player of the Month award, and The Sun claim United chiefs are planning to trigger a 12-month clause to extend their No.1 goalkeeper’s contact until June 2024.

The Spain international, 31, looked set to leave six months ago, but could sign a new contract

The club also realise they need to bend on their standard policy of offering players shorter deals on lower wages when they hit their 30s.

De Gea will likely earn in the region of £375,000 a week which he is currently picking up and will have the security of a longer-term contract.

The 31-year-old, meanwhile, has blasted his United team-mates as they drew 1-1 with Southampton on Saturday at Old Trafford.

‘The situation needs to improve and fast. We have to learn that this is not enough.’, De Gea wrote on Twitter.

Dean Henderson could leave in search of regular game time, should De Gea sign an extension

The 24-year-old is growing frustrated with playing second-fiddle to the United No.1 De Gea

Handing the Spaniard a new deal could spell the end to Dean Henderson who could  depart the club in the summer.

Henderson, 24, is contracted to the Red Devils until 2025, but is keen to leave on a permanent basis in search of regular football.

His request was blocked by interim manager Ralph Rangnick in January, however, who was keen for the Whitehaven-born shot-stopper to remain at Old Trafford.

Henderson is will not be short of offers should he seek a transfer away, and with Tom Heaton, Lee Grant and Matej Kovar all on the United books as cover for De Gea, then a permanent move away seems highly likely.